As I discussed last week, the standard tool for writing down folk music tunes these days is ABC notation. Once I realized that I needed to come to grips with ABC, I went looking for software: to convert ABC tunes to staff notation, and thence to PDF, so that I could use the tunes with ForScore on my iPad. The ABC notation site has a nice round-up of ABC-related software; and the first tool I came across that looked likely is called EasyABC. It’s an open source package with a nice GUI, and it runs on Windows, Mac, and Linux.

Of course, the first thing I did was compare EasyABC with LilyPond. LilyPond’s output is slightly nicer looking, in my opinion; and LilyPond’s notation is more expressive than ABC—if I were going to lay out an orchestral score, I might manage it in LilyPond, whereas ABC is right out.

But for my purposes most of the honors go to EasyABC. My needs are well within ABC’s capabilities as a music notation, and EasyABC is a much nicer program to use.

When you start EasyABC you see the following window: 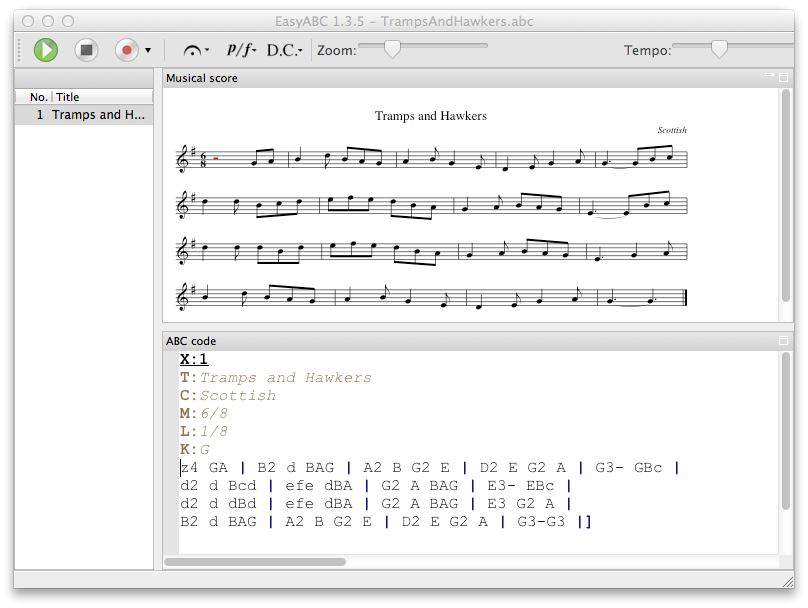 You enter the ABC code in the lower pane; as you type, it shows you the typeset score in the upper pane. When the lower pane is selected, it shows the note at the cursor in red in the top pane; and if you click on a note in the top pane it shows it to you in the lower pane. If you have multiple tunes in the file, it lists them in the sidebar. Thus, it’s a much more responsive tool than LilyPond, and fixing errors doesn’t require quite as much detective work.

EasyABC has a number of editing tools on its toolbar and in its menus; I haven’t explored these, as I’m happy to learn the ABC notation and type it directly.

Unlike LilyPond, EasyABC is capable of playing back the tune with your choice of MIDI instrument: just press that “Play” button on the toolbar. That’s useful in a number of ways. First, it’s a great way of catching transcription errors, presuming that you know how the tune is supposed to sound. I found several errors with my transcription of “Tramps and Hawkers” that way. Second, if you’ve got a tune in ABC format, and you’re not sure quite how it is supposed to sound, you can drop it in EasyABC and play it.

But third, and this is the killer app for me, you can play along with it, setting the tempo to what you can keep up with. Everything I’m reading tells me two things: never practice a tune faster than you can play it all, without error; and always pay attention to the rhythm. And that’s a problem for me. Often I’ll have an easy time with a tune except for one or two or three troublesome measures. It’s far too tempting to play the easy measures at speed, and then slow down and get clunky at the difficult ones. That’s bad practice. With EasyABC, I can set the tempo where I like, and practice all or part of the tune at a speed I can manage. This is very, very cool.

EasyABC does have a couple of nits that need picking. In playback, it has a tendency to skip the first note; if you’re going to play along with it, you’ll want to insert a rest at the beginning of the tune. And second, though it runs on the Mac the integration could be better. For example, if you select multiple “.abc” files in the Finder and “Open” them, only the first actually opens in EasyABC.

But the price is right; the environment is much more helpful than LilyPond; and it speaks the lingua franca of the folk music world. Very nice.

February 13, 2014
Words I Wish I'd Written: Finding Your Dreams
Next Post

February 15, 2014 The Abolition of Man: C.S. Lewis on Natural Law
Recent Comments
0 | Leave a Comment
Browse Our Archives
get the latest from
Catholic
Sign up for our newsletter
POPULAR AT PATHEOS Catholic
1