Today’s Aquinas: What is the Word of God?

In the last chapter, Thomas concluded the purely philosophical part of his discussion of God; now we move on to the Trinity, and specifically to the Second Person of the Trinity, the Word of God.  As we’ll find, Thomas doesn’t regard that title, “Word”, as purely symbolic, but as reflecting a deep truth about the nature of the Trinity.

The Trinity is a murky subject, and our doctrine consists of a number of truths held in tension: God is One in substance, there is only one Godhead.  God is Three in person, Father, Son, and Holy Spirit.  And yet, according to what Thomas has shown so far, God is metaphysically simple, and cannot be decomposed into separate parts.  It’s all very confusing, and my Catholic readers might pray for me that I approach the topic with all due humility.

Now, I’ve said that Thomas is moving from philosophy to theology in this chapter; but that doesn’t mean that we’re leaving philosophy behind.  Thomas is going to make extensive use of Aristotelian concepts; the following chapters are deceptively short.  Let’s get started.

We take from the doctrine previously laid down that God understands and loves Himself; likewise, that understanding and willing in Him are not something distinct from His essence.

God is person, and persons have intellect and will; and the first thing He understands and loves is Himself.  That sounds odd, almost narcissistic, to our ears.  The first thing to remember is that love, properly understand, is an act of the will: choosing the thing loved as opposed to something else.  And if the intellect and will are in proper working order, the will chooses in accord with understanding, or in other words loves each thing in proportion to its true goodness.  And as Thomas has shown, as the First Cause God necessarily and perfectly contains all that is good, and hence all that is lovable.  So indeed, God must understand Himself perfectly (for understanding is a good, and so God is perfect in understanding) and understanding Himself perfectly must understand Himself as the perfect good and hence the perfectly lovable.  And having will, for will is a good, God must love Himself perfectly.

And since there are no accidents in God, nothing but His pure essence, His intellect and will are part of that essence, not separate from it.

“…all that is understood is in the person who understands…” That’s an odd assertion; it sounds somehow mystical.  To explain it, we must delve into the Aristotelian view of the soul.

Suppose I see a dog running down the street.  I perceive a dog: in my “sense”, I have an image of the dog (a golden retriever, let’s say), and the sound of its bark.  “Sense” is a faculty shared by all animals, including humans; it’s the ability to take in sensory impressions and remember them.  At the moment, since I’m sitting at my desk, I’m imagining the dog running down the street; I have images of the dog in my head, images that are based on dogs and streets I have known.

From these images, my intellect apprehends or, in plain English, seizes the essence or form of Dogginess, a form shared by all dogs.  For Plato, this form would exist eternally in some other reality, the Plane of Forms; for Aristotle, form of Dogginess exists in two places: metaphysically, as the substantial form of every dog, and within the intellect of a person contemplating a dog.  He goes so far as to say that when I contemplate a dog my intellect literally takes on the form of Dogginess, and this allows me to reason abstractly about what it is to be a dog.  This is what Aristotle means by understanding, this apprehension of the essence of other things, and it is in this sense that the thing understood is in the person who understands.

Let me digress for a moment.  To apprehend is to seize; to comprehend is to grasp, to understand fully and completely.  To see that I apprehend the essence of Dogginess is not to say that I understand fully and completely what it is to be a Dog; it merely means that I can distinguish dogs from non-dogs.  Comprehension comes to human beings slowly and painfully, through careful reasoning, and is limited; Thomas famously said that we have never fully comprehended even the essence of a house fly.

So when I understand something, that thing’s essence or form is in my intellect.

But the object understood, so far as it is in the one who understands, is a certain word of the intellect; we signify by an exterior word what we comprehend interiorly in our intellect. For words, according to the Philosopher, are signs of intellectual concepts [De interpretatione, I, 1, 16 a 3].

This essence of Dogginess that I understand intellectually, we would more usually refer to as a concept: I have a concept of what a Dog is.  And if I want to express that concept to another person, I would use a word: “Dog” (as I have in fact been doing throughout this explanation).  The concept in my head is not the same as the word I speak; there are many words for “Dog” in many languages, but they all relate to the same concept.  Nevertheless, by analogy, we may refer to that concept as Thomas does, as a word of the intellect which we signify by the exterior word “Dog”.

In short, when I speak a word, the concept associated with that word is in my intellect.  Thomas then goes on to say,

Hence we must acknowledge in God the existence of His Word. 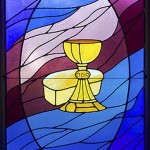 June 16, 2015 Dominicans Everywhere! Or, Is It Time for a New Level to the Hierarchy?
Recent Comments
0 | Leave a Comment
Browse Our Archives
get the latest from
Catholic
Sign up for our newsletter
POPULAR AT PATHEOS Catholic
1