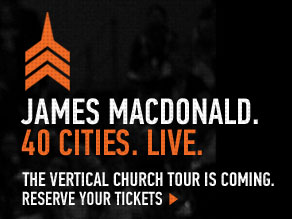 Asked to review James MacDonald’s Vertical Church by the fine people who bring you Patheos, it seemed only appropriate to do that here (there is a discussion of the book going on at The Patheos Book Club blog). As the title implies, Vertical Church is a plea for the people of God (and particularly those who lead them) to return to the first commandment: Love the Lord. (Horizontal Church would be the church that pays too much attention to loving their neighbors.) As a preacher, I was drawn to the chapter on “Unapologetic Preaching.” Thinking it would be about never having to say I’m sorry for my homiletical shortcomings, it ended up being about never apologizing for God. Do preachers do that?

MacDonald, a self-acknowledged spirit-led pastor of 13,000 souls, is forceful in his insistence that we preach Christ and not ourselves. He takes aim at therapeutic and audience-driven methods that massage Scripture in order to make its message more palatable, or worse, omit Scripture from preaching altogether so not to offend listeners. “All truth may be God’s truth” he writes, “but all truth is not God’s word.” Speak it and people will come to hear it. “Just declare it in the power of the Holy Spirit to the best of your ability and order more chairs.”

MacDonald is saying nothingespecially new. (The Word of God is clear that there is nothing new under the sun to say. -Eccl. 1:9) Most likely the reason he’s getting to say it anyway is because of all the chairs he’s had to order (not that I’m bitter). Like it or not, whenever a church has 13,000 attending (even if they are counting legs), then there’s a book/DVD/resource buying audience of coveting reverends willing to do whatever it takes to boost attendance (even if that means preaching what Jesus said).

I’ve never heard MacDonald speak, but I take for granted he is gifted. And I like how he insists that God is the one ultimately speaking through the preacher, which in my case mandates the Spirit doing a miracle on the listener. I remain astonished that anybody in a media-driven culture like our own would drive to a building to sit in a pew for an hour just to hear somebody talk about God. But they do. MacDonald would say of course they do. My takeaway is to not be afraid to say what I believe the Bible to be teaching. Just say it and let the Word do its work. And pray I said it right. Or that God said it right even though he was using my mouth and my word choices.

And as for having to order chairs, it might be helpful to remember that in John’s gospel at least, when Jesus preached he ended up losing more followers than he gained. When he asked his disciples if they were leaving too, they said no (John 6:68), but then they all left anyway once crosses got involved. Being a Vertical Church isn’t always about going up. 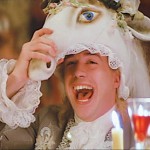 September 13, 2012 Kierkegaard on the Bible's "Carefully Contrived Discrepancies"
Recent Comments
0 | Leave a Comment
Browse Our Archives
get the latest from
Evangelical
Sign up for our newsletter
POPULAR AT PATHEOS Evangelical
1