My Kid Can Do That

“My kid can do that” is a common accusation leveled against modern artists whose paintings look nothing like the Mona Lisa, the Sistine Chapel Ceiling, or a Thomas Kinkade print. As a museum curator I heard this numerous times. Modern art frustrates our presumptions of what art should be. We want artists to impress us with their powerful talent to render likeness, entertain us with images that “look real” (i.e., look like a photograph). But we are not to be trusted. We want to be flattered and entertained (and perhaps even a bit titillated) at the art museum. And so when we happen upon a painting of colors and lines, or a composition of simple lines and distorted shapes, we’re offended, and so we dismiss it as the work of charlatan and condemn it as childish, not worthy of being called Art. However, my response to those who claimed that “my kid can do that,” was “that was the point.”

Many modern artists intentionally made paintings that looked childish. In fact, the drawings of children were powerful influences on artists in the late nineteenth century who became dissatisfied with the flamboyant artistic virtuosity and excessive rationalism that dominated academic painting. 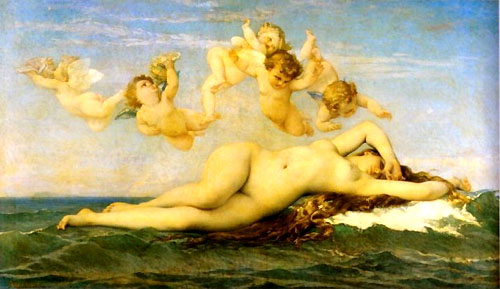 Alexander Cabanel, The Birth of Venus, 1863

And so some artists, beginning with Gustave Courbet and Édouard Manet, sought to re-enchant a secularized world dominated by science and empiricism, by re-enchanting art, making it once again responsive to human experience that remains mysterious and inexplicable, in spite of the technologies that claim to control it. Some of these artists sacrificed their considerable artistic skill, trading their virtuosity for honesty and vulnerability, to make paintings that gave expression to the flame of life’s mystery that modernism could not douse. And where did some look for inspiration? Children’s drawings. 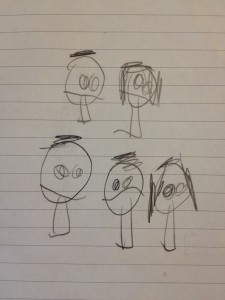 Why are we attracted to children’s drawings? One reason is that their capacity to represent the world is not capable of interpreting their experience of the world, which overwhelms them with wonder and awe. We are drawn to their honest and sincere struggle to render the complexity of the world through their inferior skill. It is this gap between their technical competency and the vastness of their subject that attracts us to these drawings. They are great because they cannot represent the world. Their beauty is in their failure.

Modern artists from Paul Gauguin to Paul Klee and Picasso were attracted to children’s drawings for precisely this gap, this failure, which they felt needed to be reasserted in artistic practice. By the mid-nineteenth century the great artistic achievements and innovations of the Renaissance had lost its connection to religious belief, mystery, and eros, and had become an aesthetic technology of control that corresponded with the disappearance of human fallibility in the wake of Enlightenment optimism. Modern art is often condemned for its arrogance. Yet in sharp contrast to its established academic rivals, modern artists were painfully aware of human weakness and brokenness and made painting that responded to this reality that we would like to forget. In fact, it might only be a slight exaggeration to claim that the development of modern art consisted in the recovery of original sin and the radically unfree will. Ironically, Christian critics have condemned modern art for rejected the form and content of academic painting, seeing in this rejection the modern artist’s participation in modernism’s attack on traditional religious belief.

The development of modern art, however, was a means to rebuild religious belief and faith through art with the theological rubble that remained after the ravages of Enlightenment atheism, moralism, and scientism, to which academic painting had become subservient. By the nineteenth century, academic painting succeeded in reducing the Christian faith to moralizing myths of heroism and virtue in service of the Enlightenment state. Artists who became dissatisfied with these conventions and developed new pictorial vocabularies, like Manet, were mocked by the academic establishment as childish and incompetent. Although an aesthetic product of the Enlightenment, modern art undermined the Enlightenment project.

These modern artists subsumed their virtuosity for the sake of assuming a child-like posture in the face of a terrible and beautiful world, in which forces act upon us, despite our attempt to control and manipulate them for our own benefit. Modern art is a lament in paint, an affirmation that we are broken and the world is not as it ought.

How else could the Spaniard Pablo Picasso have depicted the atrocities of the bombing of Guernica in 1937 during the horrific Spanish Civil War through anything other than a child-like posture of helpless wonder and incomprehension. Guernica is a massive mural, a 25 foot-long witness to art’s inability to explain or make sense of the world, a child’s lament at the unspeakable cruelty that threatens to suffocate the beauty in the world. Guernica is Picasso’s resistance to the world as it is.

Modern art reminds us that contrary to our artistic, scientific, and political pretenses to control, we remain helpless children in the face of a world we cannot comprehend, which fills us with awe and terror. And the only thing left that we as helpless children can do is to cry out for help and believe that our cry will be answered.

Even my kid can do that. 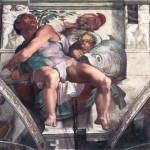 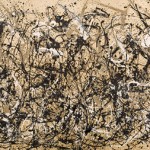 October 16, 2012 Beyond the Image
Recent Comments
0 | Leave a Comment
Browse Our Archives
get the latest from
Evangelical
Sign up for our newsletter
POPULAR AT PATHEOS Evangelical
1

How Can You Know If You're...
Preventing Grace
Related posts from Cultivare