Jesus, Millstones, and the “Little Ones”

I’ve been spending time in Matthew 18 today. I’ve been deeply impressed with a sense of Jesus’ passionate concern for the marginalized, outcast, and “insignificant.”

The chapter begins with the disciples’ question to Jesus, “Who, then, is greatest in the Kingdom of Heaven?” They were positioning themselves, angling for status, and pressing Jesus to make a pronouncement on their respective places in the 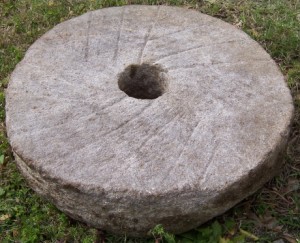 Kingdom which he was bringing. They were likely focused on a Kingdom coming very soon…rather than “out there,” off in the distance, in some “Heaven.” They wanted to know where they ranked in the order of that coming Kingdom–it was power politics–the way of the world. In an act of dramatic reversal of expectations, Jesus says they got it all wrong. He sets a child in their midst and says the kingdom is defined by such as this one. In first-century Palestine, a child was both of small stature and status–not prized, valued, and adored as our children today. They were fundamentally dependent on others for survival–inherently humble and weak. The literal child in their midst represented the weak, marginalized, and powerless in society.

Then Matthew shifts from the literal child (teknon) to the “little ones” (mikron). Jesus warns his followers, and all the community of God, not to lead the “little ones” astray–not to cause them to stumble–to quit following Jesus. Like children, the little ones of have no power or influence or significance. They are the “withouts.” When the powerful abuse the powerless, they incur the wrath of Jesus. “It would be better for them to have a large millstone hung around their neck and to be drowned in the depths of the sea” (18:6). What does it mean to cause a little one (a marginalized, powerless person) to sin–or to quit following Jesus? It’s easy to think of child abuse in the church, or overt racism or discrimination, or bullying the weak and “different,” or excluding by our messages (implicit and explicit) and our programming the poor, the uneducated, the jobless.

Jesus is on the side of the poor. In Matthew, God’s preferential option for the poor is alive and well. We see this in Jesus’ siding with the mikron. As Frederick Dale Bruner puts it, “mikro-care is Jesus’ contribution to community building.” Why is it that our priorities and affections in the church so often lie with the rich, the educated, and the “significant”–when Jesus clearly told us that the Kingdom is the reverse? Why do I worry about my status, my accomplishments, my C.V., when Jesus’ concerns have nothing to do with them?
Previous Post

October 30, 2013 Learning Lessons
Recent Comments
0 | Leave a Comment
Browse Our Archives
get the latest from
Evangelical
Sign up for our newsletter
POPULAR AT PATHEOS Evangelical
1

A List of Sins from the...
Christian Crier
Related posts from Cultivare

Will Babies Be in Heaven? (Part 6): Jesus...
My wife Grace has miscarried and whenever I think about it, I...

Is summer vacation just a longing for heaven?
[su_vimeo url="https://vimeo.com/223543783"] Vacations are a wonderful way to make memories for you...

Helen Bond's The First Biography of Jesus-- Part...
BEN: In Chapter 3 we really get down to brass tacks, as...
view all Evangelical blogs
What Are Your Thoughts?leave a comment
Copyright 2008-2020, Patheos. All rights reserved.