On the Fractal Nature of the Earth Mother

This is our home:

Hurtling through space at a speed of 67,000 miles per hour, spinning through the vastness of space, held in a delicate balance between the forces of escape velocity and the gravity of the sun, spinning like a top on a merry go round.    Neither so close to the sun that atmosphere is burned off nor so far that all water is frozen, we live in a perfect moment of balance where life can exist.

We are very lucky indeed spinning on our lovely blue marble.

This is a view of the earth that is incredibly modern and difficult to relate to the knowledge that we have of the ancient views of the Earth Mother.   She was almost always associated with fertility.  She was an incredibly local goddess, rooted in the landscape.  In my studies of Indo-European lore the Earth Mother is moist and dark.  She is connected with bees and with black boars.  She is rooted in rivers and mountains.  How do we reconcile these two ideas?

As modern pagans we have the challenge of integrating modern scientific knowledge with ancient wisdom and understanding of the world.  Often times I see that people are incredibly polarized between one or the other, insisting that only scientific research can hold the keys to wisdom or that the knowledge of the ages, written down long ago is far more important in understanding.

I think we need both science and religion.

On the one hand we have modern knowledge of speed, orbits, and chemical composition.  On the other hand we have ancient stories of the Earth Mother.  Many ancient peoples viewed the earth mother through the lens of sacred topography.  A mountain or river was usually the focus of the cult.  In modern times ADF’s own Rev. Rob Henderson has been a proponent of this sort of localized worship.  For years he and his grove have gone to the headwaters of the local river as a sacred pilgrimage.  They have developed a deep and abiding relationship with the goddess of the river there, calling her Ana and invoking her as the manifestation of the Earth Mother.

So how do we reconcile the beautiful blue self-sustaining marble of Lovelock’s Hypothesis with the recognition of the far smaller goddesses of the river and mountain?

I found my answer in mathematics and ecology.

In ecology, most of us are familiar with the idea of a watershed.  This is an area where all the local rivers flow into once source. I’ve seen increasing awareness of local watersheds and their importance. In many ways this is smallest manifestation of the Earth Mother.   In fact there is an entire classification system just for ecosystems. Just like animals can be classified according to species, genus, and family an ecosystem can be classified as a biotope, ecosystem,  eco-region, biome, ecozone, and biosphere.

For instance, here in Michigan, I live near the intersection of three different watersheds,  The Red Cedar Watershed, the Looking Glass Watershed and the Grand River Watershed.  Watersheds are about at the ecosystem level.   My eco-region is the upper Midwestern Temperate Forest.  We have climax species of Maple, Beech, Oak, and Ash among others.   I live in a Temperate Broadleaf Forest Biome and we are part of the Neartic ecozone.  The biosphere is the whole of the earth itself of course, and the debate on whether or not the earth is truly a self-regulating organism is still continuing, just in case you were wondering.

So take a moment and think about how you might understand or define your own relationship to the land in that kind of way.  Each level is a way of understanding the Earth Mother.  I like to imagine her as a series of nesting dolls, with the biosphere as the largest matryoshka and the river or watershed as the smallest.  So try to imagine your own line of earth mothers from your local river, to your larger ecosystem type, to your general biome to the earth as a whole.

Now take a moment and think about the river watershed next door to yours.  That river is a goddess too, relating back to your own ecosystem in a different yet similar way.  Try to imagine all the rivers in your region and how they might relate as a larger whole.  Try to imagine all those goddesses relating back to your biome, whether it’s the Temperate Northern Forest or the Southwestern Desert, or the Midwest Grasslands.  Each of those too are larger goddesses.  What might the Earth Mother of the Midwest Grasslands be like?  How might she be different and similar to the Temperate Rainforest Earth Mother?  Each level is filled with the sacred.  As you move downward along the line of understanding what happens is a fractalized format of deity with each level echoing the larger and yet being unique unto itself.

What I am talking about is a meta-structure underlying our understanding of the particular deity form we know as the Earth.  And in the case of this sacred being which sustains us all she takes a fractal shape with each level of ecosystem being an aspect of her self that is both unique and similar to the whole. 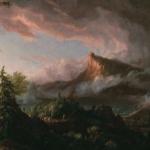 October 21, 2015 Dandelion Seeds: Religion is For When the System Goes Down
Recent Comments
0 | Leave a Comment
"I felt it. I knew it. I took it and hid it in my garden..."
mary Making a Witch Bottle When You’ve ..."
"How would you "run into one?" How would you know it's targeted to you?"
JenniWest Making a Witch Bottle When You’ve ..."
"am delving into the less known and this article resonated with me. Will be creating ..."
Ronnie Here Gerda: the Norse Goddess of Gardening ..."
"Oh I love that! I will have to watch it."
Melissa Hill Four Prayers For the Land and ..."
Browse Our Archives
Follow Us!

Hekate and Her Four Sovereign Goddesses:...
Keeping Her Keys
Related posts from Dandelionlady 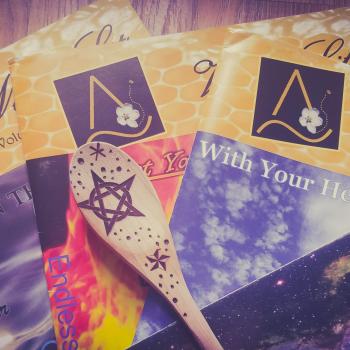