Many Traditions of Druidry:

Modern Druidry is quite different that the image of old Celtic wise men the word Druid conjures. These days there are a number of different kinds of Druid organizations. There’s ADOA or the Ancient Order of Druids in America, founded in 1912 as a fraternal order similar to the Masons. These days it a magical teaching order using an ecological framework. Then there’s the Order of Bards, Ovates and Druids, founded in Britain as more of a philosophical and study based group. There’s RDNA, the Reformed Druids of North America, which started as a group of people at a religious college who didn’t want to go to Christian services. They were required to go to some sort of religious service on Sundays, so they made one up! These days it’s still a small thriving branch of American Druidry, and leads us to the form of druidry I know the most about, ADF, or Ár nDraíocht Féin (said arn re-oct fain).

My Tradition of Druidry, ADF:

Like RDNA, ADF is a religious organization and is descended from it in some ways. But while RDNA has a fairly simple motto, “Nature is good. Nature is very good!” ADF is a little more than that. The goal is to recreate a new paganism that is rooted in ancient customs. I like to think of it as a recreation of Indo-European Tradition Religion. It is focused on a group of languages that are all connected, the Indo-European languages. That’s because language, more than anything else is how we share and understand culture, and by extension, religion, so the Celts (where the druid name comes from), the Norse, the Greeks, the Romans, are just a part of that group of languages.

It also contains the ancient Hittites, the Persians (Likely the Three Wise Men of the Jesus myth were Persian fire priests) the Russians, the Balts, and the Vedics, which means that Hindu religion as we have it today is descended from the same traditions that give us winter solstice traditions of decorating your house with evergreens.

What makes it all work for ADF is that all our rituals are done the same way, and are rooted in that symbology. We have three sacred things, and three itself is a sacred number.   The Fire, Well, and Tree are the triple center that our rituals circle around. However, we are not reconstructionists. That means we aren’t trying to re-create exactly what the ancient cultures of the Eurasian Continent did, but we are trying hard to understand what and how they worshipped so that we can be inspired with accuracy to create the best rituals we can. We can and do change and do differently than what they did: there are times when modern reality is more important than ancient custom. One of the most important is that we always honor the Earth Mother first in our rites. This is because in the times we find ourselves we humans are at a crossroads where we must learn to live in harmony with the earth.

Our founder Issac Bonewits himself said that we must put the Earth Mother first because we are damaging her, and most of all I would say we are damaging ourselves. But when we put the earth mother first, when we understand exactly where our ideas and our ritual structures come from, when we know fully how our past has formed today, we can then change that history.

Is that not what modern paganism does? We rewrite the past and take back words such as “Witch” and “Wicca” . We bend them to our new meanings, first with Gardner, then with each succeeding generation we try again. This thing I am part of: ADF Druidry, is even newer than Wicca, with only a handful of decades under our collective belts, and yet is rooted deeper in the past in many ways.

Our ritual forms and structures are based on Indo-European practices rather than the more modern forms of magic practiced by the Golden Dawn and the Rosicrucians from which the quartered circle and duothistic model of Wicca developed.   That’s not to say Wicca is bad. On the contrary, it was my foundation and starting point, and for many a solid ending point. It was not enough for me and so I found Druidry and a blend of old and new that suits me well.

We are an incredibly young religion with incredibly lofty goals. All we want is to create a modern unified pagan option for people that provides clergy, congregations, individuals, and families the space for spiritual well being within an authentic pagan context.   We have groves internationally and recently our first priest in Europe completed her training. This is all a huge task that involves innumerable councils, votes, bylaws, and records of all of it.

The Vision of ADF:

ADF has gone from an idea hatched in a basement, hashed out around a campfire, with Xeroxed copies of training materials mailed out to people across the country to an international organization attempting to deal with coming up to modern best practices for non-profit organizations not only here in the United States, but in other countries as well. We are learning how to form a proper board of directors in other countries so that they might get official religious status for their groves and their clergy just like we have here in the United States. We are translating our core documents into other languages so that they too can participate in our grand plan.

This is our goal, and nothing less: to create an international network of thriving communities of druids and pagans that evolves its own culture rooted in the past, suited for today. It’s my dream. It’s a dream worth struggling for.

If you like my work, consider checking out my Patreon page for more blog posts, artwork, and spiritual guidance. 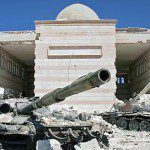 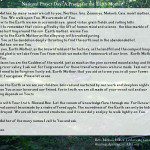 May 4, 2017 National Day of Prayer
Recent Comments
0 | Leave a Comment
Browse Our Archives
get the latest from
Dandelionlady
Sign up for our newsletter
POPULAR AT PATHEOS Pagan
1