Trigger Warning In Spite of Myself: Leaving ADF

Earlier last week I resigned from my clergy status through ADF: Ár nDraíocht Féin a Druid Fellowship.  I did so along with a number of other priests and one of our initiates, all women. I was inspired by their leaving and realized it was time for me to walk away too. ADF uses people. The desire to become clergy, to help people in the name of the Gods and Spirits is powerful for some of us. The idea that there is a training program, available for free, was exciting. However, I have found that just like on the internet: if something is free, then you’re the product.  I dreamed of people who wanted to make the world a better place and wanted to heal the earth. I was inspired by the ADF constitution. Those were just words, and the reality was very different.

This was my resignation letter posted to the Clergy Council of ADF:

Inspired by Sara B. and Snow Fuller, I also have decided that it is for the best for me to not renew my clergy credentials and to let my ADF membership lapse. I’ve been a member of ADF for a decade now and I have come to understand that my values do not align with the reality of the leadership of ADF. I find it ironic that the virtues of Druidry, including integrity and courage are inspiring me to leave ADF.

I have seen racism in the ADF Facebook Discussion Group swept under the rug by the Mother Grove. I have seen misogyny in our highest levels of leadership. I have seen our bylaws used against those who needed assistance. I have seen how our rules about bringing complaints against an individual damage the victims. I have seen good people time and time again say these things, give real solutions to these problems and be ignored. I have been ignored as well.

I joined the clergy with a very specific vocation. My goal and oaths were and are to find a sustainable path and create a culture for the future that is actually in harmony with the earth. It’s all there in my vocational statement if you choose to read it. The disrespect that is shown to people is the same disrespect that is shown to the land. This organization is not working toward sustainability. Not even the sustainability of its own existence.  I have seen how those who stepped up to lead were hurt, emotionally abused, and used. I’ve seen them called names. People have to choose to be damaged by their religion or leave their religion. It’s a bad choice to have to make. It doesn’t have to be this way, and I hope that the culture here changes. I have tried my honest best to bring these issues up and make changes. It has not worked.

We live in a world where climate change is real and every one of you should be worried. I am worried. I have been worried for two decades now.  I no longer have the time to support people who are not focused on mitigating our real and present global crises. I have come to understand that we cannot separate climate justice from social justice even though there are many who would like to think that we can. I need my religion to express these underlying values both in writing as well as in action. For those of you who are doing this work, and think that you are doing good work in the name of ADF, I have seen how new people have seen that work, then have joined ADF, and then been hurt by the reality that our bylaws and underlying group structures are unhealthy.  You are like a co-dependant partner when you do this. You make ADF look good so that there are new targets for damage. This is wrong.

I will be doing ritual work and divination to determine what I need to do to release or alter my oaths of priesthood. I will be transitioning my online presence and materials away from the Reverend title.  I will be working to make sure there is a smooth transition in all the groups I am leading both online and in person. I have until May when my membership lapses to transition the groups. Because of the fact that my blog is on a public server, there are posts that I cannot edit. That may mean there will still be posts with older content that reference the Rev.  There will be no new posts with that designation. My volunteer and priestess efforts will continue, focused on my local work here in Lansing as well as my online presence.

So here I am. You can read about the whole thing on the Wild Hunt If you’d like.

Here is the public post where all the resignations are collected:

One of the final straws was an experience with racism I had on the ADF FB Discussion group where I suggested that druids shouldn’t wear plain bleached white robes with hoods because they look like Klan outfits. I suggested adding some green ornamentation or other druid identifying items. Multiple dudes then proceeded to freak out at me and insist that I was wrongheaded. Finally, it came down to a man telling me that black people all wear their shit-stained underwear showing and so they can’t complain about what other people wear and if I didn’t like it, I could go wear a hijab.

So yeah, that sucked.

The thing that really sucked was when the Mother Grove (which is basically the board of directors) looked at screenshots of the conversation, they told me it was an “interpersonal issue” and that I would need to file a personal complaint. The dude broke the ADF constitution and he’s still a member. I got no support in that, and I saw him gloating this week about how the Social Justice Warriors have left ADF and he’s glad.

If I want to stick my neck out all alone and get slammed for being anti-racist, I can just be a blogger, I don’t need to be a Reverend for that.

I was prepared for getting torn down.  I left, and I knew it would be nasty. I did lose some friends. I am in mourning. The real problem is that I had no idea how nasty it would get.

Imagine a crowd cheering “How low can you go?!” as ADF tries to do the trigger warning limbo.

Because it got worse. Oh, it did.

I quit because of racism, sexism, and casual cruelty.  Thing is, I didn’t quit because of pedophilia. Oh, but that’s where it went.  I was not ready for that. Nope. Nopety nope.

It’s been a long time since I’ve been triggered. Yes, I am a survivor of child sexual abuse. It wasn’t for long, and it was a long long time ago. I’m pretty okay about it. I don’t talk about it much because I don’t need to. Lord and Lady, this week is the week for reliving trauma apparently.

That’s right folks, I quit along with four other well-respected women leaders, each of us speaking about policy, bylaws and cronyism, and then I get contacted about pedophilia in ADF.  Admittedly it’s all from long long ago, in the time before time. As far as I can tell it was in the 80’s and 90’s. Twenty years ago now.

It’s not long enough for me.

I’ve heard stories of four different men.  I know one was prosecuted to the fullest extent. One was the children’s coordinator for a grove and driven off by other members who saw the signs. One is the founder of ADF.  I’m not kidding. Here’s the official announcement about Issac:

Four instances. How many have I not heard of?

What Did I Learn?

I was planning on doing this long post about all the bylaws that need changing, and how they could restructure the Mother Grove, Clergy Council, Council of Senior Druids, and the Council of Lore.  The ADF organizational structure is labyrinthine.

It seems ridiculous to restate all the specific bylaw changes and org chart flows that I’ve been talking about for years. Plenty of people in ADF know what I think.  Instead, let me try to summarize the big picture things I’ve learned.

I’ve been blogging as DandelionLady since 2002. First on LiveJournal, then on Blogger, Then on the Agora here at Patheos, and now here with my own blog at Patheos. I know I got this. I do monthly priest reports over on my Patreon blog, so feel free to keep up with where my priestwork has taken me.  I’m not going anywhere. I am standing tall where I am. I still have a lot to say.  I wish that ADF was a good home for me. It is not. As Brene Brown said in Braving the Wilderness:

“Being ourselves means sometimes having to find the courage to stand alone, totally alone.” “True belonging has no bunkers. We have to step out from behind the barricades of self-preservation and brave the wild.” 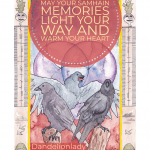 October 29, 2019
Pagan Parenting: Trick or Treating and Longing for the Wild Times
Next Post