Book Review: What is Remembered Lives by Phoenix LeFay

Where Wicca Was Long Ago

Witchcraft has come a long way since I was reading Llewellyn books in the nineties. It’s been a good long while since I read standard pagan books and I am surprisingly pleased at how much I enjoyed this one. I’ve been reading anthropology and archeology for about ten years now. I just couldn’t find reasons to buy new pagan books. They all said the same things. Those books weren’t resonating with my lived experience and they weren’t teaching me a darn thing. There were reasons I gave up Wicca and became a generic “pagan” around 2005.  Wicca seemed pretty darn selfish when it came to the spirit world. There were two options. One, “I need love. I need money. Gimmie gimmie!”  people wanted the spiritworld to be a never-ending ATM of the good life, or it was all psychological warfare and transformation. Take your pick.

Either way, most of the models of relating to the spirit world seemed to involve bossing spirits around and treating them worse than I would want to treat anyone.  I faded away from Wicca, especially after one of my spirit guides specifically insisted that I give him offerings. That was about 2002. Offerings freaked me out because at that point no one was talking about them. I’m happy to say that seems to have changed, at least as far as LeFae’s book is concerned.

What is Remembered Lives is a new kind of witchcraft, one that talks about offerings, as well as some of thornier conversations that need to be had, such as cultural appropriation, gender-neutral deity, and right action.  LeFae did an excellent job of presenting her methodology for honoring the primary groupings of spirits: the gods, the ancestors, the fey and the land spirits, I was actually quite thrilled to see that she treated each group distinctly.

The book was divided into three primary sections: Devotion, Revolution, and Honor corresponding to the gods, the ancestors, and the spirits of the land. Each section had corresponding rituals, spirits, and ideas for how to bring that aspect into balance with the practitioner. I gotta say, I loved the names of the sections and the ideas behind that.  What group of spirits would be more interested in revolution than all those who came before us and lived in suffering because of the world around them? As a society, we desperately need to work on honoring the land spirits, and devotion to the gods is something that challenges so much of what we believe in, especially when we are moving away from a Christian framework. Devotion is hard when it’s been rammed down your throat.

The Good and the Bad. Mostly Good!

I did have a few quibbles with the lore, I’m not sure that Brighid is really a psychopomp, but the reality is that Brighid is “all the things” to a fervent worshipper.  Like Odin, Papa Legba, and a few other deities in the modern era Brighid seems to be able to do what needs to be done in just about any arena. That’s not lore though, that’s modern gnosis that I’ve witnessed over and over again. LeFae uses the story of the death of Brighid’s son and her subsequent sorrowful keening as the model for this work of helping a soul over into the afterlife. It’s not an unreasonable stretch, and frankly, if the ritual works, it works. I’ve known too many people who were sticklers for only following the lore to be worried that the writer took some leaps. I talk about Velnias being queer, so I can’t really complain at that stretching the lore with modern gnosis thing. I wish she had emphasized what was lore and what was UPG a little bit more, but I’d still totally recommend the book for beginners and those interested in deepening their devotional practices.

I particularly resonated with the Aradia Lemon Blessings Ritual. Turning lemons into blessings is such a classic motif after all. As I read the book I jotted notes on post-its to and added them as bookmarks in the pertinent sections.  Three times I wrote a post-it note thinking she wasn’t going to cover some important points. Every time I had caught her with something I thought was missing she covered it in the next few pages. I would go back and pull out the post-it, or cross off the negative and add a positive. I’m a cranky old pagan and I was pretty thrilled to be able to have so little to crank about and so much to enjoy.

The list of things that can happen when you get involved with the fae got a post-it that said only: #truth, because the fae do what they will do, and there’s no doing anything about it.  I do think it’s too easy to conflate the fae with the land spirits, and they often run together. She does fall into that trap a bit in the book. Honestly, it’s very common. I get the feeling that the true fae tend to like confusing the muggles by acting like land spirits and the land spirits don’t really care if you call them fae.  Still, I was grateful that she talked about the deep importance of the land in one’s devotional practice. Looking up the history, ecology, flora, and fauna of your home is one of the most important things one can do to understand one’s place in the world in a very physical way.  When you know where you are, then you can reach for the stars.

I’ve had a hard time suggesting good basic intros to paganism. Much of what I started with like Cunningham is outdated and doesn’t cover important topics.  Much of the ADF Druidic literature is for members only or is not something I feel comfortable recommending. I’ve been in a bit of a rock and a hard place. I would totally use this as an intro to devotional practices for students. While I use a non-Wiccan ritual structure, I think that it would be easy enough to adapt.  Lots of good and useful material. I’m going to try out a variation of her ancestor elevation ritual.

It’s so nice to be able to recommend a solid intro book for paganism. Yay for Phoenix LeFae! 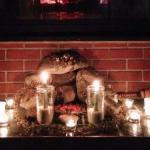 December 11, 2019
4 Ways to Understand Experiences of Precognition and Visions: A Guide for Psychic Development
Next Post

January 21, 2020 Imbolc Invocation to the Fire Goddesses
Recent Comments
0 | Leave a Comment
"I watched Sabrina because an ex friend constantly quizzed me on it because I was ..."
Nekoshema Watch Hilda not Sabrina if You ..."
"Please what else can you share about Suale's Daughter Ziezdre, the Baltic Female mars goddess... ..."
Jack Ingersoll The Baltic Sun Mother and her ..."
"Hi I'm Lithuanian and I'm pretty sure aušrinė is calling out to me.do you know ..."
Gabija Devotion to a Lithuanian Goddess of ..."
"I'm a bit confused - you say White Sage (Savlia apiana) is more closely related ..."
Angela M DiMare-Messier Eight Methods of Purification That Aren’t ..."
Browse Our Archives
Related posts from Dandelionlady