Some notes from a politically conservative Latter-day Saint Islamicist

I agree that there is scriptural warrant — there has been from the very beginning, from right there in the story of Adam and Eve — for Latter-day Saints to be concerned stewards of nature and our planet.  And it’s very likely that we haven’t given that subject enough thought.  Perhaps especially of late.  A major reason for that neglect is that environmentalism has come to be associated with left-leaning politics and with the expansion of government power.  Is there an effective way to be an “environmentalist” without being a statist?  This seems to me an important and rather urgent question.

I found this a worthwhile piece:

“How do Mormons know what they know?”

I’ve been criticized as a moral coward and a craven corporate bootlicker for failing, thus far, to speak out on the allegations of sexual abuse recently leveled against a past president of the Missionary Training Center in Provo.

I’ve had several reasons for remaining quiet on the issue.  Notable among them is the fact that I have no special information or insight regarding the matter — I had never even heard of the man until his name showed up in the papers — and, hence, nothing especially important to say about it.

I don’t know whether he’s guilty or not.  Candidly, I was inclined, at first, to tentatively credit the charges.  The accused seemed, albeit quite vaguely, to concede having done or thought inappropriately.  But then this came along, leaving me a bit more unsure:

It seems to me that I have no special standing and no particular calling to declare a public verdict.

But I can’t approve (though I’m not surprised by) attempts to use the case as a weapon against the Church of Jesus Christ of Latter-day Saints.  I’ve never doubted that wickedness and hypocrisy exist in the Church, that unworthy people sometimes enter our temples and represent us as missionaries and even hold leadership positions.  This is unsurprising.

Where it threatens others, such evil should be identified and excised.  Gross immorality in the Church merits Church discipline.  Crimes merit criminal punishment.  And, if problems in reporting or in dealing with such offenses become apparent, they should be fixed.  But the words of Aleksandr Solzhenitsyn should never be forgotten:

Gradually it was disclosed to me that the line separating good and evil passes not through states, nor between classes, nor between political parties either, but right through every human heart, and through all human hearts. This line shifts. Inside us, it oscillates with the years. Even within hearts overwhelmed by evil, one small bridgehead of good is retained; and even in the best of all hearts, there remains a small corner of evil. . . .

If only there were evil people somewhere insidiously committing evil deeds, and it were necessary only to separate them from the rest of us and destroy them. But the line dividing good and evil cuts through the heart of every human being. And who is willing to destroy a piece of his own heart?

Moreover, as I’ve thought about the case, I’ve failed to see how, even if the accused is guilty, this would prove that Joseph Smith had no gold plates, or that there were no Nephites, or that there is no God.  And those are the questions that interest me most intensely.  If there is a God who inspired the Nephites to keep a record on golden plates that was eventually translated as the Book of Mormon, the rest — all the good and, yes, all the evil — is footnotes.  Sometimes painful footnotes, to be sure.  (Please let nobody interpret me as having minimized the suffering of abused children or victimized women, let alone that perpetrated by the Mountain Meadows Massacre or the  Nazi Holocaust or the Gulag or the Ukrainian terror-famine or the Cambodian killing fields.)  But, in the end, the most fundamentally important truth for me is partially but well captured in a statement from the Prophet Joseph Smith:  “All your losses will be made up to you in the resurrection, provided you continue faithful. By the vision of the Almighty I have seen it.”  If the Prophet’s declaration is correct, it puts everything else into a very different perspective.

On a somewhat related matter,

You might think that, since I’m a life-long and very serious political conservative — e.g., I supported Barry Goldwater for president as a pre-teen, whereas my parents voted for Lyndon Johnson; my subscription to National Review, which began when I was thirteen, continued through my mission and continues to this day; I helped to host William F. Buckley Jr. when he spoke at BYU while I was an undergraduate; I volunteered in the gubernatorial and presidential campaigns for Ronald Reagan; I’ve spoken several times at the annual libertarian Freedom Fest in Las Vegas, and will do so again this year — I would be at home on a Facebook site called LDS Conservatives.

You would evidently be wrong.

A friend has called my attention to the reaction, on that site, to my article on Islam in the current Ensign.  Thus far, I’ve merely skimmed some of the comments, but I’m being mocked there as pretending to an expertise on Islam that I don’t actually possess and have been described as, among other things, a “fool” and a “tool of Satan.”

Some are evidently puzzled at the insidious method by which I managed to smuggle such pro-Islamic propaganda into the pages of the magazine — and particularly, at my fiendish timing, in the issue appearing at Easter.  One fellow says that, within an hour of receiving his copy, he announced to his bishop that he would forthwith be “structuring his tithing” — how one does this, I have no idea — so that BYU receives absolutely no support from him in the future.  Another person even boasts of having, along with her husband, ripped out and burned my article so that it would not sully the purity of the remainder of the Ensign‘s pages.

Here’s one fact worth noting:  I didn’t propose the article, nor did I volunteer to write it.  It was requested.  By whom?  By the same priesthood quorum that will preside at and conduct the meetings of General Conference this weekend.

You may have missed this delightful article, of which Matthew Wheeler kindly reminded me: 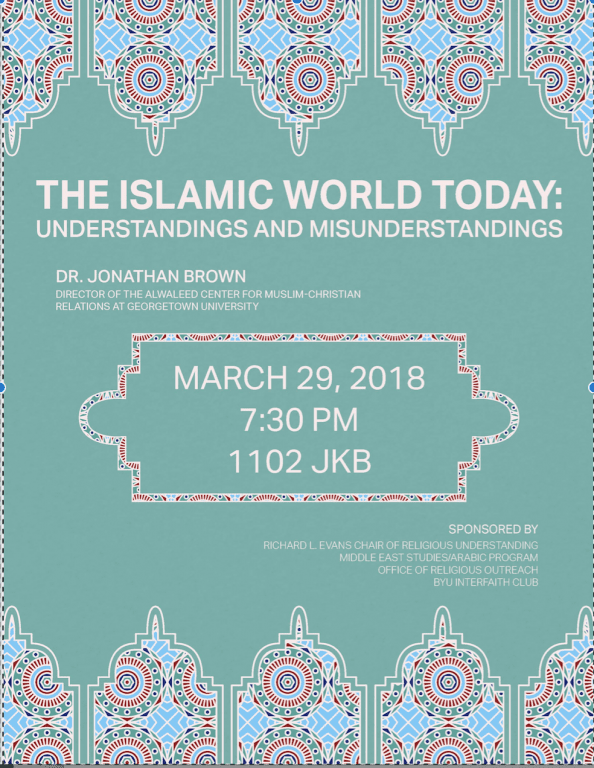