Closely related to the obligations felt by a host toward his guests is the notion of generosity, which was one of the leading vir­tues of a pre-Islamic Arabian hero. And, of all those heroes, there’s one whose name became virtually synonymous in subsequent Arab tradition with the idea of generosity—Hatim of Tayyi. He is once reputed to have said to his wife Mawiyya,

The guest’s slave am I, it’s true, as long as he stays with me, / Although in my nature otherwise no trait of the slave is shown.[1]

Once again, a story will give a clearer idea of the early Arabian ideal of generosity.

It’s told that Hatim’s mother, when she was pregnant with him, dreamed that someone asked her, “Which would you prefer—a generous son named Hatim, or ten sons like those of other people, lions in the hour of battle, brave young men, strong limbed?” Attractive as the second choice was—what pre-Islamic mother wouldn’t have been pleased with ten heroic warrior sons?—she answered without hesitation that she would prefer the generous son, Hatim. And she received what she desired. As Hatim grew up, he developed the habit of taking his food and going out into the roads, looking for travellers to share his food. If he found someone he could share with, he would eat. If he didn’t, he would throw his food away and fast instead.[2]

Hatim’s father (who seems not to have been consulted about the kind of son he wanted) was displeased with this wasteful behavior. After all, food didn’t exactly grow on trees in the Arabian desert. So, as some kind of cure, he gave Hatim a slave girl, a mare, and a foal and sent him out into the middle of nowhere to herd the family camels.

On reaching the place where he was supposed to pasture the camels—who were, as one can imagine, a large portion of any well-to-do desert Arab’s treasure—Hatim went out, as was his habit, to find somebody with whom to share his food. But, search as he might, he could find nobody. Finally, off in the distance, he spotted a party of riders coming toward him. He hurried out to meet them, and it turned out that the riders were three extremely famous Arabian poets, riding together to the court of Hira.

“Young man!” they called out. “Do you have anything that we can eat?”

“How can you ask me a question like that,” Hatim replied, “when you see all these camels I have?” And he slaughtered three camels for them.

“You shouldn’t have gone to such trouble,” said one of the trav­elling poets. “We didn’t really need anything more than a little milk. Even if you felt yourself obliged to give us more than that, a single young she-camel would have been plenty.”

“Oh,” said Hatim, “I knew that well enough. But, looking at you, I noticed that you were dressed in different fashions and that you look unrelated, so I figured that you must be from three differ­ent places. And I wanted to do something for you that would be so striking that you would each mention it when you got back to your home.”

At that, the poets complied with his wishes, and each recited a verse in praise of Hatim’s generosity. This might have been expected to please him, but it didn’t.

“I wanted to do something kind for you, but now, with your verses, you’ve been more generous with me than I was with you. I’m in your debt, and that isn’t what I had in mind. I swear a sol­emn oath to God that I’ll hamstring every camel in the herd unless you step forward and divide the entire herd among your­selves.”

Having heard this solemn oath, and knowing full well that—as we’ve learned—Hatim was honor- bound to fulfill it, the three poets did indeed divide the herd up among themselves. Each of the three received ninety-nine camels. (Making a neat total of three hundred camels in the original herd, when the three that Hatim had slaughtered are figured in. A bit too neat, perhaps, but old stories are often like this.) Then they proceeded on to Hira.

Not long after this, Hatim’s father began to overhear disquiet­ing rumors about his camel herd and came to investigate. What he saw—or, rather, what he didn’t see—infuriated him. “Where . . . are . . . the . . . camels?” he asked, measuring his words carefully and struggling to maintain self-control.

“O my father,” Hatim replied brightly, “by means of those cam­els I have conferred upon you everlasting fame and honor. That fame and honor will stick to you always, just like the ring of the ringdove sticks to its neck, and men will always be hearing some verse or other of poetry in which our family is praised. This is your reward for the camels!”

Perhaps it was a joke. Perhaps, the father thought, perhaps I just didn’t hear it quite right. “Did you actually do with my camels what I just heard you say you did?”

So Hatim’s father took his family and moved away, and Hatim was left in the desert with his slave girl and his mare and the mare’s foal.

[2] The late Hugh Nibley loved to tell a precisely parallel ancient story, and a very touching one, about the patriarch Abraham, who was very much a nomadic bedouin shaykh.  It is recorded in the last few minutes of the beautifully produced video The Faith of an Observer: Conversations with Hugh Nibley, which is available at https://deseretbook.com/p/faith-observer-conversations-hugh-nibley-covenant-communications-14999 and also accessible online in rather blurry form at https://www.youtube.com/watch?v=eYPVZvRXpIY.

[3] As we’ll discuss below, swearing “by God” is not only permissible among devout Muslims, it is essentially obligatory.

July 27, 2020 "Nephite Daykeepers: Ritual Specialists in Mesoamerica and the Book of Mormon"
Recent Comments
0 | Leave a Comment
Browse Our Archives
get the latest from
Sic et Non
Sign up for our newsletter
Related posts from Sic et Non 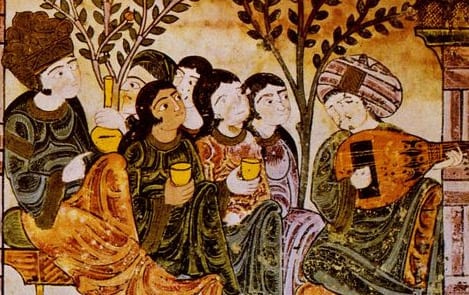