“When change and tears are past, all safe and blessed we shall meet at last.”

From 7 March 1954 through 17 October 1954, Hugh Nibley delivered a series of thirty weekly lectures on KSL Radio that were also published as pamphlets. The series, called “Time Vindicates the Prophets,” was given in answer to those who were challenging the right of members of the Church of Jesus Christ of Latter-day Saints to call themselves Christians.

Jonn Claybaugh has, yet again, generously shared concise notes for students and teachers of the Old Testament in this year’s Come, Follow Me curriculum.

The Interpreter Radio Roundtable for Come, Follow Me Old Testament Lesson 29, “He Trusted in the Lord God of Israel,” on 2 Kings 17–25, featured Neal Rappleye, Jasmin Rappleye, Hales Swift, and Stephen Smoot.  The roundtable was extracted from the 5 June 2022 broadcast of the Interpreter Radio Show. The complete show may be heard at https://interpreterfoundation.org/interpreter-radio-show-June-5-2022/.  Moreover, the Interpreter Radio Show can be heard each and every Sunday evening from 7 to 9 PM (MDT), on K-TALK, AM 1640.  As an alternative for those of you who may have ethical problems with auditing radio broadcasts, of course, you can listen live on the Internet at ktalkmedia.com.

Along with many of our friends, my wife and I attended this morning’s funeral for Michael Lyon.  (See the “Michael Lyon Tributes” on the Interpreter Foundation website, to which Margaret Blair Young has now added, in a comment, some of her own personal memories of Michael.)  As funerals of good people very often are, it was an inspiring meeting, and one that reminded me of many areas in which I need to improve.  I was pleased to see Michael’s gentleness, humility, and self-less kindness noted by the speakers — his brothers Philip and Stuart (the latter, who is out on a mission, in remarks read by a nephew); his sister, Toi; Todd Compton; and George Handley (a member, I believe, of his stake presidency, and my former associate dean) — in addition to his obvious artistic talent and intellectual brilliance.

Michael Lyon very much enjoyed music, and the music chosen for his funeral reflected excellent taste.  Which is to say that it’s music that I would like to have played at my funeral — on the unlikely assumption that anybody will come to mine either to perform, or to sing, or even to attend.

I’ve always liked Andrew Lloyd Webber’s Pie Jesu, and it was performed at Michael’s funeral by a young soprano relative.  I’m very fond of a rendition of it by the Norwegian singer Sissel (Sissel Kyrkjebø).  Next, Jin Tai Ahn and Ian Tai Ahn performed a cello/violin duet of Johann Sebastian Bach’s Jesu, Joy of Man’s Desiring.  Here’s a version of it performed by the New London Symphony Orchestra under the baton of Leopold Stokowski, with the Norman Luboff Choir.  “I play the notes as they are written,” Bach is said to have commented, “but it is God who makes the music.”  The closing hymn, sung by the congregation, was “Be Still, My Soul,” with words by the Scottish lyricist Jane Borthwick (1813-1897) that were inspired by those of the German hymn writer Katharina von Schlegel (b. 1697) and set to music by the great Finnish composer Jean Sibelius (1865-1957).  (The a capella boys’ choir Libera performs it beautifully here.)  These are the lyrics as they are given in the Latter-day Saint hymnal and as they were sung today at the cemetery:

One piece that I would probably add to my hypothetical funeral program is “Going Home,” which, of course, is based upon the largo from the New World Symphony of Antonín Dvořák.  I go, again, to a recording by Sissel.

I’m just going home
Quiet like, some still day
I am going home
It’s not far, just close by
Through an open door
Work all done, care laid by
Never fear no more
Mother’s there expecting me
Father’s waiting too
Lots of faces gathered there

All the friends I knew

I’m just going home
No more fear, no more pain
No more stumbling by the way
No more longing for the day
Going to run no more
Morning star light the way
Restless dreams all gone
Shadows gone, break of day
Real life has begun
There’s no break, there’s no end
Just living on
Wide awake, with a smile

Walter Whipple was the organist for the service, and I especially loved his choice of “Jerusalem” — apparently a favorite of Michael’s — for the “recessional” or postlude music at the funeral’s end, after Shirley Ricks had pronounced the benediction.  Of course, his rendition on the organ lacked William Blake’s intriguing poem, which was set to music by Sir Hubert Parry — music that, in its most famous version, was orchestrated by Sir Edward Elgar.

And did those feet in ancient time,

Walk upon England’s mountains green:
And was the holy Lamb of God,
On England’s pleasant pastures seen!

And did the Countenance Divine,
Shine forth upon our clouded hills?
And was Jerusalem builded here,
Among these dark Satanic Mills?

I will not cease from Mental Fight,
Nor shall my Sword sleep in my hand:
Till we have built Jerusalem,
In England’s green & pleasant Land. 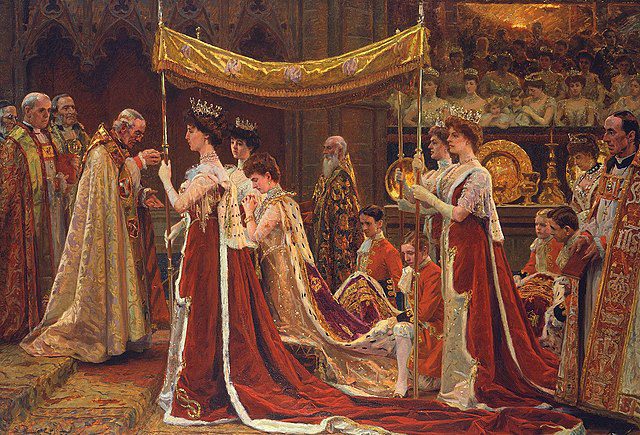