Why I Hate The Most Popular Verse on Twitter (Philippians 4:13)

I can do all things through Christ who strengthens me. Philippians 4:13

That, folks, is the worst verse in all of Holy Scripture.

Many Christians, though, love it. I hate it. It grates on my last nerve. And since the rise of social media, my loathing of this verse — even just the citation itself — has only gotten worse.

No verse has been more misused and abused than poor Philippians 4:13.

A favorite of athletes, achievers and Twitter users, it’s often used as a spiritual performance-enhancing drug, a power-up like Mario’s mushrooms that can transform whelps into powerful heroes. Almost universally, people use the verse as kind of pep talk for achievement, for victory, and for conquering the unconquerable.

In short, Philippians 4:13 has become about winning.

No surprise, then, the verse is the undisputed champion of Twitter, too. In 2014, people tweeted that verse more than 613,000 times, more than doubling the number of tweets for the second most popular verse. A quick search reveals its popularity — and flagrant misuse — shows no signs of waning.

Unfortunately, Philippains 4:13 isn’t about winning or conquering anything at all.

It’s not about achievement or victory.

It’s about contentment in the midst of hardship not overcoming it.

Taken in context, the verse is actually quite beautiful and does offer deep wisdom and a prophetic challenge to our consumer, capitalist-based society (see this post) that measures our worth in achievements, what we win and who we beat out.

But the verse has been so marred, almost beyond redemption, that it’s become little more than a motivational slogan. It disfigures Christian spirituality into a selfish exercise of being more, getting more, winning more.

This kind of spirituality that lionizes the victors, of course, stands in stark contrast to the Christ who became one of the abused, the marginalized, and the poor. I find it hard to imagine the Christ who identified with the least of these would be so ultimately concerned with divinely emboldening you to max out your bench press or to run your fastest time on the track.

Used in context, though, that verse means something completely different. It means that because Christ gives me strength, I will be content whether I win or lose, whether I pass or fail, whether I finish the race or fall out at mile 11.

Because there is more to life than winning and losing, achieving and failing.

Then, life is not about competing and our brothers and sisters are no longer our competition — or opponents — in the race for the necessities of life. Recognizing our belovedness requires that we see the belovedness in all others.

And when we center our identity in our belovedness and not in our successes or failures, then we have a chance, like Paul, to know what it means to be strengthened by Christ not so that we find achievement but that we might find contentment.

Because ultimately, when we know our belovedness and the belovedness of others, contentment isn’t found when we have enough or when we win. Rather, it is only found when all have enough, when all are fed, and when justice is offered to all.

May 20, 2015
The Divine Protest of Pentecost: The Politics of Language and Respectability (Homily for Pentecost, Year B)
Next Post 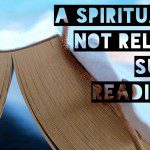 May 25, 2015 Fiction for the Soul: 9 Spiritual But Not Religious Summer Reads
Recent Comments
24 Comments | Leave a Comment
Browse Our Archives
Related posts from Edges of Faith