As a former high school and collegiate track athlete, I have been joyously immersed in the Olympics this week, watching and re-watching historic performances from sprinters like Usain Bolt in the 100-meter and 200-meter dashes and like Wayde van Niekerek who shattered the world record in the 400-meter dash.

But as I watched these races this week, I keep feeling this flutter of nervous energy and my heart pounding as the track officials would call runners to their mark at the beginning of the race. It was an echo of that same feeling I had for seven years as a track athlete every time I lined up for a race.Now as an adult, and far removed from competition, I still experience that same nervous flutter, but now it’s as I’m about to begin a different kind of race, the race that begins for many of us in just a week’s time when school starts back. It’s the race of attempting to get everyone on time to the right place, the right activity, in the clean clothes, and with matching socks. I know many of you may be feeling that flutter as well, as parents are being called to the starting line for a marathon of sports events, music lessons, extracurricular activities, homework, and, of course, their own work.

We are a busy, overscheduled, and stressed out people.

Between the demands of work and family, we are often tired and in need of a break, a chance to rest and recharge. Whether we are short order cooks or lawyers, CPAs or auto mechanics, we all need a few moments to stop and smell the roses, to goof off with our kids, to stare at a painting in an art museum, to swim in a waterfall, or to watch a sunset with someone you love. As Christians, we tend to think of this as observing a Sabbath rest, but unless we make a firm practice of it and carve out sacred, untouchable time, our work and to-do lists tend to creep in to even our times of Sabbath.

While studies show the average work week for full-time employees is creeping up toward 50 hours a week, perhaps the most significant trend is what’s called work creep, or job creep, where your work, labor, and daily tasks begin to take over even your days off or your evenings at home. Most of us do it, of course, like just checking our e-mail as we’re putting dinner on the table or heading into the movie theater. It’s not hard for it to happen in today’s hyperconnected world. Smartphones in our pockets often mean that even if you’re thousands of miles away from the office, the stresses of work are really only as far away as the palm of your hand.

Technology is steadily erasing the line between work and home. A Harvard Business School survey showed that professionals spend on average almost 90 hours a week “on work,” either at work, actively monitoring work out of the office or remaining accessible at a moment’s notice for work purposes.

It’s exhausting to the human spirit and makes it difficult to practice the Sabbath and without Sabbath rest, it becomes hard to see our true identity isn’t in what we do and what we produce, but in how much we are loved by God; that our worth isn’t in our successes and accomplishments but in our belovedness.

In a culture that tends towards overwork and overcomsumption, theologian Walter Brueggemann calls practicing the Sabbath an act of resistance and warns that without Sabbath, we become disconnected from God and from our communities.

Even Jesus needed this kind of rest. The gospels frequently tell us he went into the mountains to pray by himself, to get away from the teaching and healing work he was doing in the world. And this understanding of the Sabbath goes back to creation itself when God rested on the seventh day and this day of rest was a defining mark of what it meant to be Jewish as well.

So when we hear Jesus and the synagogue leader debating about whether it’s appropriate to do healing work on the Sabbath, I frankly have some sympathy for the synagogue leader. While he tends to be cast as a dogmatic and controlling man whose cold legalism strips him of any compassion, he isn’t exactly wrong here. There are six other days of the week in which work ought to be done, and out of faithfulness and maybe even compassion, he doesn’t want to see work and labor creeping into this day of rest for his community. It’s possible he even believes he’s protecting the people – many of them powerless peasants or day laborers – from exploitation by minding a firm, sacred boundary that prevents any kind of work on the Sabbath.

But, of course, that also kind of indicates the problem, doesn’t it? This synagogue leader defines the Sabbath by the work that ought to be done on the other six days of the week. It’s the weekend warrior mentality of work hard, play hard as if the Sabbath is some kind of end-of-week reward for the work done during the week rather than a gift of God and a reminder of who we are.

Jesus, on the other, defines the Sabbath through the lens of liberation, the liberating center of our lives by which we should define all our other days. In other words, he doesn’t want the Sabbath to just be part of our week. He wants it to be part of us.

This debate over the Sabbath begs the question of what is the Sabbath really for? And for whom does the Sabbath exist? Is it just a religious code word for a weekly vacation or is there something more going on?

Here and as in other Sabbath healing controversies in the gospels, Jesus is trying to root people in the understanding of the Sabbath not only in the context of God resting from creation but also of God liberating the Hebrews from slavery in Egypt.

In Deuteronomy, God explains that no one – not you, not your children, and not even your livestock – is to work on the Sabbath SO THAT, SO THAT your male and female slaves, the least among you, can have a day of rest just like you.

On the Sabbath day, the people were supposed to recall that they too had once been enslaved but were now liberated SO THAT they could now see and become aware of the ways in which liberation has not yet come into the world, and to realize that a true and holy Sabbath can never happen until all can experience this Sabbath liberation.

That’s why, I think, Jesus even noticed and called out to this bent-over woman in the crowded synagogue when most would have never noticed her in the first place, much less interrupted their sermons for her.

She was the very kind of person, overlooked and vulnerable, for whom the Sabbath existed.

So it’s no surprise that Jesus invokes the language of liberation from slavery and bondage in healing her and she then can finally stand up with a straightened back, a clear image, both then and today, of what a free person looks like.

In this view, Jesus isn’t violating the Sabbath or overturning Jewish tradition when he unbinds and unshackles this woman. Rather he is responding to the Sabbath’s deepest call on our lives.

Our Sabbath rest, however, we practice it should always orient us to this deeper call, the vision of justice and jubilee Jesus proclaims when he begins his ministry – of good news for the poor, release of the captives, and the year of God’s favor. The Sabbath should always call us to Isaiah’s vision detailed in our reading today, of a Sabbath society that ensures the hungry have food, that the yoke of slavery is removed that the hurting are cared for, and that we don’t speak evil of each other.

And so like Jesus we are called to work toward the Sabbath in our world SO THAT all can be at rest as heirs of God’s kingdom.

We know what this experience of Sabbath and liberation is like because we experience it each week in the Eucharist. We come here on Sunday not just for a minivacation or a break from the hectic work week which attempts to define our worth in performance and paychecks. We come here to be reminded of who we are and who we were declared in baptism, God’s beloved and liberated children. We come here not just for an emotional boost to get us through the week, but to be centered in God’s love and vision for the world so that we can go out into the world healed and transformed to do the work of God.

So in this way, the bread you receive today in the Eucharist is an experience of the Sabbath in our world, the liberating food from which our life flows. It is both the rest and assurance of God’s love for us, the holy food with which God feeds us, nurtures us, and reminds us of our belovedness and it is also the charge to go out into the world, to declare the Sabbath of God’s love and to share bread with others until all are fed.

September 4, 2016 The Sacrament of the Church Rummage Sale (A Homily)
Recent Comments
0 | Leave a Comment
Browse Our Archives
Related posts from Edges of Faith 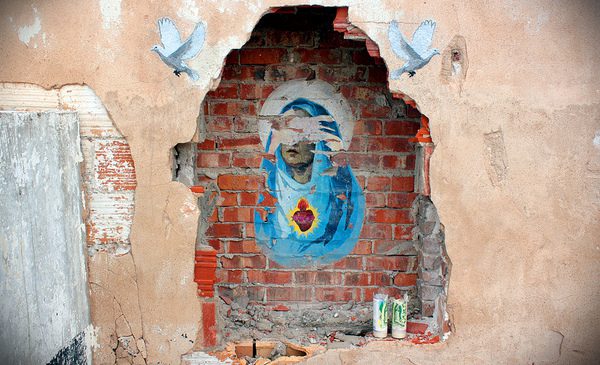