The Subversiveness of Gentleness in a Time of Violence and Terror

The Subversiveness of Gentleness in a Time of Violence and Terror December 13, 2015 David Roberts 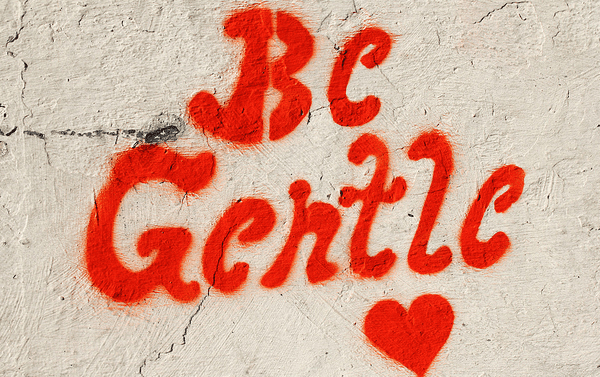 “Let your gentleness be known to everyone.”

Gentleness isn’t really a quality we value in our culture. When we think of qualities we want to put on a resume, gentleness isn’t typically the first one on the list, if it even comes to mind.

Think about it the candidates for president right now. Do any of them — from Donald Trump to Bernie Sanders — really embody the idea of gentleness? Would we want them to? I mean, what good is gentleness in the face of economic uncertainty, in the wake of civil unrest, and in the wake of terrorism?

Do we really want gentleness leading the fight against terrorism?

So after the last three weeks in our country included mass shootings, terrorism, and increasingly incendiary political rhetoric on all sides, this one sentence from Paul to church in Philippi stopped me in my tracks. It was almost jarring in both its simplicity and audacity. Of all the qualities the Church is meant to embody in their city — love, generosity, or truthfulness — it is gentleness Paul tells Philippian Christians to embody. In fact, in letter primarily about the character and conduct within the church community, this instruction one of the only in the epistle that directly addresses how Christians should conduct themselves within the broader community of Philippi.

He doesn’t ask them to preach the gospel in the streets or attempt to convert others as he had done when he was in Philippi. He just wants them to be gentle.

“Let your gentleness be known to everyone.”

And in Philippi, nothing could have been more subversive than gentleness.

Gentleness, Paul says, in a place that had previously mobbed him, stripped him naked in the streets, and beaten him with rods, tortured him in public, and hauled him off to jail.

Gentleness, Paul says, in a strategic military and economic outpost, muscled with fortifications and stocked with Roman soldiers and grizzled war veterans.

Gentleness in a place where the final, decisive battle between armies still loyal to Julius Caesar faced down and decimated armies led by Caesar’s assassins.

Gentleness in a region — Macedonia — that birthed Alexander the Great, who by the age of 30 had built an unparalleled empire and conquered the world at the tip of a sword, all funded by gold and silver mined in Philippi.

Gentleness, Paul says, in a place steeped in an historic tradition of strong-armed violence and war. In Philippi, people would notice gentleness. In a world that continues to operate on principle might makes right, it’s clear to me that the letter to the church in Philippi might as well be addressed to us today. And, what if we were to follow Paul’s advice, could we too do something subversive with gentleness in a land frequently intoxicated with violence and power, with weapons and war?

Can you imagine gentleness in the United States right now? In the raw, exposed nerves following terrorism and mass violence, what would it be like to let our gentleness be known to everyone?

Outrage ricochets through our public discourse on news networks and on social media, a cycle of rhetorical violence and condemnation. There is palpable fear everywhere. Fear of terrorists. Fear of Muslims. Fear of Republicans. Fear of Democrats. Our world is brimming with fear right now.

Right now, there is a scar running through our nation’s psyche. Many of us are walking around with the broken pieces of our hearts, clenched in our fists like daggers and weapons, desperate to strike so we can feel something besides trauma and tragedy, eager to injure if only to cauterize our own wounds with rage and retaliation. We lash out at anyone who might disagree with us or be different than us.

But let your gentleness be known to everyone, Paul says.

Because gentleness breaks the cycle.

Gentleness in a culture that believes violence heals our wounds is about the strongest and bravest thing I can imagine.

Let your gentleness be known to everyone.

Because trust me, right now, everyone will notice.

Gentleness refuses to allow fear — fear of terrorism, fear of Republicans, fear of Democrats, fear of fear itself — to fuel outrage and outrageousness. Because gentleness seeks security not through force or exclusion, but through unity and friendship.

To respond to injury of any kind — personal slights or terrorist attacks — with gentleness runs contrary to every fiber of our being that demands justification and punishment in response. Gentleness in Philippi and the United States isn’t just subversive. It’s really, really hard. We want to fight back, fundamentally, because we fear. We fear what might happen next time if we don’t fight back this time.

But to be gentle is to be fearless in times of fear.

Gentleness asks us to trust those our culture tells us to distrust.

And that kind of gentleness can break the cycle of violence and fear. These small acts of gentleness and friendship disrupt a culture calling for war, retaliation, and exclusion because it shows us another way really is possible, the way of Love, the way of Jesus, the way John the Baptist foretells every Advent.

It is how we make straight the crooked paths in the world and prepare the way for Christ.

Let your gentleness be known by everyone. Gentleness might just change the world.

It might sound overly optimistic. It might sound even a little naive. But I believe it. And I think Paul did too. See, he had firsthand experience in Philippi with the transformative and subversive power of gentleness and friendship that breaks the cycle of violence and fear.

Paul and his friend Silas were terrorized and tortured in Philippi. They were falsely accused, wrongly incarcerated, stripped naked in the public square, and beaten bloody with rods by the masses. It was, in every sense of the word, mass violence, terrorism designed to stop them from practicing Christianity.

While in jail, an earthquake freed Paul and Silas. In the darkness, the Philippian jailer thought his prisoners had escaped. And he was ready for his life to end. He drew his sword to take his own life because that’s what a culture of violence and death demands — punishment for wrongdoing.

Here was a man, a jailer, who was part of the very society and belief system that had targeted and terrorized Paul and Silas. They could have walked out of that jail, safe, secure, and free. But for Paul, the cost was too high. The cost was the life of one he should have considered an enemy. Paul didn’t want to end those Philippians who did him wrong. So he responded with gentleness to his jailer, an emblem of the very people who had harmed him.

“We’re still here,” he said. “We don’t want your life to end.” In other words, to Paul, the jailer’s life was more important than his security or his freedom.

Paul’s gentleness, his grace, broke the cycle of violence that would have otherwise left the jailer for dead. In its place, Paul created a cycle of gentleness and friendship.

The jailer took Paul and Silas to his house. He washed the wounds his people the Philippians had inflicted on the men. What gentleness, what trust, what vulnerability to let your enemy wash the wounds his people had inflicted. What trust, what strength, what courage to allow one’s presumed enemy to heal your places of pain. And then, taking the water that had washed the wounds, the jailer himself was baptized. And Silas, Paul, the jailer and his family feasted and rejoiced together.

This is what the subversiveness of gentleness can do in a culture of violence and war.

So, let your gentleness be known to everyone.

This post is brought to you by my generous patrons, R.G. Lyons, Zeb and Tara, Chris Wickersham, and Kenny Pierce.

Please consider supporting my work by pledging  —even just $1 — at Patreon. Thanks for reading Thanks for sharing. Thanks for your support. It means more than you could know.

December 13, 2015
What Does Fear Lead To?: A Homily on Star Wars, Yoda, and John the Baptist
Next Post

December 28, 2015 Unspeakable Joy, Unbearable Tragedy: Christmas, Incarnation, and Holy Innocents (A Homily for Christmas 2C)
Recent Comments
0 | Leave a Comment
Browse Our Archives
get the latest from
Progressive Christian
Sign up for our newsletter
POPULAR AT PATHEOS Progressive Christian
1

Truth or Trump: Christians Must Decide...
EcoPreacher
Related posts from Edges of Faith