What Does Fear Lead To?: A Homily on Star Wars, Yoda, and John the Baptist

What Does Fear Lead To?: A Homily on Star Wars, Yoda, and John the Baptist December 13, 2015 David Roberts 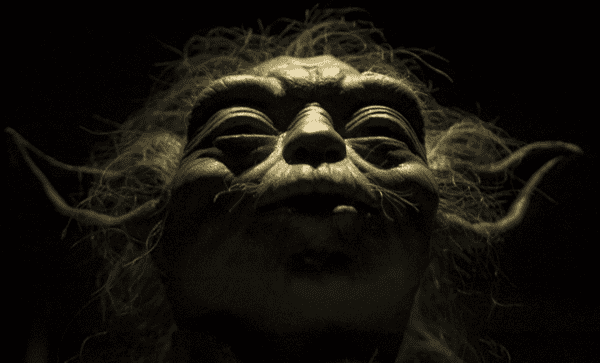 I have been waiting for this particular week in December for more than year. That’s because this weekend, the new Star Wars film finally debuts.

See, I’ve been a huge fan of the original Star Wars trilogy my entire life. In fact, my lucky socks may – or may not – feature Yoda and R2-D2 on them, and I may – or may not – be wearing them at this very moment. One of my first major investments as an adult was to hunt down and purchase the original theatrical releases on DVD.

But as I’ve gone back and rewatched these films in preparation for this week, I’ve begun to take issue with some of the series’ implicit philosophy and theology, and this has been thrown into sharp relief this week particularly as I’ve been reading the words of John the Baptist. John the Baptist is essentially the New Testament’s version of Yoda. Yoda, the great and wise Jedi, who paves the way for the Chosen One who will bring balance to the Force and usher in a new era, just as John the Baptist is the one who comes before the Christ who will usher in a new reign, the Kingdom of God, into our world.

And that’s not where the similarities between John the Baptist and Yoda end either.

Yoda lives in a desolate jungle wasteland called Dagoba and Luke Skywalker comes to him to seek the truth about his life, about the world, and about his path in it.

In a similar way, John the Baptist lives out in the desolate Judean wilderness, and people flock to him seeking the truth, the coming kingdom of God, and their role in it.

John eats bugs and honey, which always makes my children gag when they hear it.

The similarities go on and on – they even dress alike. But Yoda and John differ on their understanding of one very important, very fundamental experience of human life – and that’s the experience of fear.

See, to Yoda, fear almost something to be afraid of. He famously tells Luke that fear leads to anger and anger leads to hate and hate leads to you becoming Darth Vader. No one wants to be Darth Vader, the most menacing villain of my generation. But it’s not really reasonable to expect people avoid fear. Fear is a natural human reaction; it’s a common human experience we all share.

So I’m thankful that John the Baptist in today’s gospel casts a very different vision than Master Yoda about the experience of fear. To John, our fear doesn’t have to lead to anger and hate. Instead, it can be transformative.

Now you may have noticed, but the fear is palpable in today’s text. As we read it, with all its evocative and apocalyptic imagery, you might have even felt a twinge of unease or fear.

John speaks of a coming cataclysm, of a terrible coming wrath. He warns that the way of life of the entire Jewish people is going to be cut down and thrown into fire. Since this gospel was written after the destruction of Jerusalem and the Temple by Rome, Luke’s original audience might well hear John’s warning as a reference to that traumatic, cataclysmic event. But John here might also be speaking of the general sense of perilousness that often pervades uncertain and confusing times. In either case, I think John is clearly giving voice to fears people are already experiencing in the Roman Empire as an occupied, oppressed, and impoverished people in much the same ways as our politicians and national leaders give voice to our fears in our time.

For John, he was speaking in a time full of fear and violence, a time full of increasing poverty and anxiety about the future, a time where people have patiently waited for change and salvation long enough to question whether it might ever come. And that world echoes our own in some significant way, doesn’t it?

We too live in a time of rampant fear and anxiety. And let’s be honest. We fear radical terrorism. We fear mass shootings. We fear indiscriminate bombings. We fear climate change. We fear falling into poverty, or losing our civil rights, or losing our liberty. And rightfully so. Anybody would be scared of these things. Many of us may feel like the world is in the midst of a confusing transition, and like the people in John’s time, we don’t really know what to do.

“What are we supposed to do?” the people respond to John in today’s gospel.

And this is our question isn’t it?

“What are we supposed to do with all our fear?”

Pundits and national leaders have offered a variety of contradictory responses — from increasing gun control to arming ourselves better, from bombing Syria and Iraq to banning Muslims entirely, from cutting government assistance to increasing it. We have to do something, they argue. They just can’t agree on what. But because we can’t agree and we live in such fearful and anxious times it has led many to outright anger and hate.

It’s hard to escape and even harder not to get sucked into the incendiary cycle outrage and demonization in our political discourse, on national news networks, and on social media. It does seem, at times, that maybe Yoda was right, and all that fear has led to anger and that anger has led to hate. We hate Muslims. We hate Christians. We hate Republicans. We hate Democrats. We hate the 1 percent. We hate the poor. We hate … our neighbors.

But John the Baptist offers a way to make straight this crooked path of division and hate, a way to transform the oft-traveled path of fear to hate into the way of Christ, the way of perfect love which casts out all fear.

“We are afraid of what’s coming next!” the people say. “What are we to do?”

And John answers not with a partisan polemic or with his customary prophetic fire. His answer instead is unexpectedly gentle.

If you have two coats, you must share with anyone who has none.

If you have food, you must share with those who are hungry.

If you’re in the business of collecting money, don’t take advantage of people.

If you’re a soldier or tasked with the security of an area, don’t abuse your power and bully people.

It seems simple enough, this foundational ethic of the Jesus movement, but in practice, it’s really, really hard, to allow God to transform our experience fear into an expression love.

See because fear can cause us to isolate ourselves into echo chambers of the like-minded in order to ease our anxiety. Fear can cause us to worry about our own comfort and security at the expense our neighbors. But in the kingdom of God, with God’s help, fear can be a signal, not to withdraw but to enter more deeply into the lives and experiences of our neighbors with love and with generosity.

That, to me, is what it means when the prophets and angels say, “Fear Not for the Lord is with you.” That doesn’t announce the end of fear. It’s the transformation of it from something with the potential to divide, wound, and destroy and into something that can heal, unify, and save.

In other words, when fear shows up, we as the people of God are called to follow a different way, to create a different paradigm built on beloved community, on generosity, and friendship, on the recognition that the person who seems so different from us shares one important mark – the mark of God’s love.

Honestly, I’m not very good at this.

In other words, he didn’t talk about any of the things I wanted to talk about.

Instead he asked for advice on contacting Muslims in his local area. He wanted to invite them over to share a meal with he and his wife. And it totally disarmed me. It disarmed me of my own fear and outrage. Now, nothing may come of his invitation. Something might. Who knows? There’s fear and distrust on both sides of this issue. But it strikes me as exactly the kind of thing John the Baptist was asking us to do during times when fear runs high.

Chris reminded me that when the world is full of fear and tipping towards anger and hate, we as Christians are called to host a potluck, to share a meal, and to invite our enemies whoever they may be.

After all, that’s how the kingdom of God comes to us each week, here at the table, in the form of a simple, humble feast of love and reconciliation.

+++
This post is brought to you by my generous patrons, Denise Williams, Ryan Parker,  John Henson, Greg Strong, and more.

If you found this meaningful, please consider supporting my work by pledging  —even just $1 — at Patreon. Thanks for reading Thanks for sharing. Thanks for your support. It means more than you could know.

November 18, 2015
The Tragedy of the Syrian Samaritan: A Parable Retold in Times of Terrorism
Next Post