The Tragedy of the Syrian Samaritan: A Parable Retold in Times of Terrorism

The Tragedy of the Syrian Samaritan: A Parable Retold in Times of Terrorism November 18, 2015 David Roberts 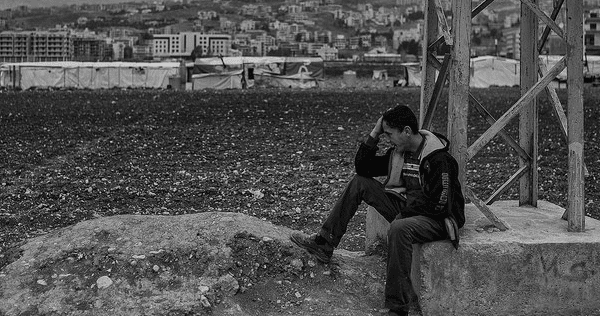 There was once a governor who was traveling and was beset by terrorists on the road. They bombed his motorcade and left him for dead on the roadside.

Now, by chance, a fellow conservative politician was passing by and saw the wreckage of the terrorist attack. Angered and disgusted, he immediately made plans to ban immigrants from predominantly Muslim countries. Pulling out his iPad, he changed his social media profile picture. There, standing amid the still-burning cars, he began to draft legislation and a press release to refuse any Muslim refugees, to create a religious test for immigrants, and to restrict Islamic activity in his state. He took photos of the scene and plastered the pictures online as evidence that Muslims and refugees are dangerous. The photos immediately went viral. The politician went away feeling righteous and justified.

Likewise, a progressive Christian pastor passed by and saw the aftermath of the terrorist bomb and the half-dead governor. The pastor had also just seen the viral campaign to ban Muslims from the state. Disgusted and angry, he immediately began to tweet Bible verses about welcoming immigrants and started a petition for people of faith to support Muslims and refugees. He went away feeling righteous and justified.

But a Syrian refugee, while traveling along the road, came upon him and was moved with pity. He had lived through the terror of terrorism firsthand. It was why he had left his beloved country in the first place. So he went to the man and bandaged his wounds with strips from his own shirt. He then carried him to the hospital and sat with him day and night, praying that Allah would heal the governor.

When it was clear the governor would live, the Syrian refugee left.

“Take care of him,” the refugee told the nurses and doctors. “He still has a long road to recovery. I will check in on him and when I come back, I will pay for whatever his care costs.”

“You’re coming back to pay his medical bills? Don’t you know who this is?”

“Of course, I know him,” the refugee replied. “He is a victim of terrorism, just like me.”

The story, of course, doesn’t end there.

While the governor was recuperating in the hospital, he held press conferences condemning terrorism, the attack on his life, and Muslim refugees fleeing violence in their home countries.

He signed on to the conservative lawmakers’ resolution decrying Muslim immigrants and declared refugees were not welcome in his state. He called on good Americans everywhere to report their Muslim neighbors who might be up to no good.

But when he exited the building, he saw two Homeland Security officers waiting for him. He was questioned, detained, and taken into custody on suspicion of collaborating with the terrorists who attacked the governor. Three stories above, from the window of his hospital room, the governor watched, gripping the cane he now needed in order to walk, satisfied that justice was done and that he had made his state safe from one less potential terrorist.

The Syrian Refugee’s mug shot was plastered all over the media as the mastermind behind the attack on the governor. His face became synonymous with terrorism and the violent threat refugees posed.

Within a few weeks, after being interrogated by the U.S. government, the Syrian refugee was not deemed a threat, so he was quietly sent back to his home country to be reunited with his family.

A terrorist’s bomb killed them that same week.

November 14, 2015
God Our Midwife: Birthing Peace from Violence and War
Next Post

A night with Lot in Sodom,...
slacktivist
Related posts from Edges of Faith