Welcoming Wonder and Curiosity: Lessons from a Comic Shop for the Church 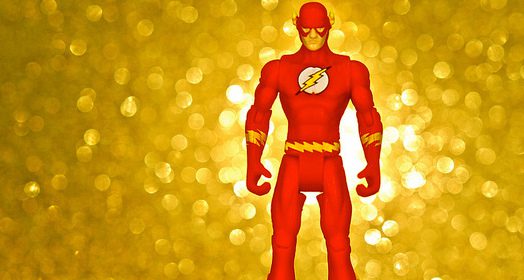 I have loved comics for as long as I can remember being able to read.

What started with a mail subscription to G.I. Joe ballooned into an infatuation with The Mighty Thor (and the panoply of Norse Gods) and a growing collection of unopened Toy Biz X-Men figurines from the early 1990s. My room as an elementary and middle school student was lined with these unopened figures, hanging from clear thumbtacks in neat organized rows on my baby blue walls. I filled sketchbooks with images of Grifter, the Flash, Thor, and other favorites, and eventually created my own team of superheroes with detailed biographies and story arcs.

A big part of my love for comics had to do with the hours I spent in a comic shop in Alabama, where my curiosity and weirdness weren’t aberrations my classmates mocked but were embraced and encouraged with enthusiasm.

So this past weekend, I decided to share that experience with my own two boys by taking them to their first comic shop.

My youngest, a fervent 7-year-old reader with an imagination a size only his imagination could imagine, has lately fallen in love with The Flash. But I didn’t want his primary introduction to a world that was so meaningful to me as a young kid to come through film or television. It just seemed so cheap. I wanted to introduce him to actual comics.

There’s something magical that a thin volume of newsprint can contain such wonder and inspiration; it’s almost as if the medium is part of the message in so many comics, of unsuspecting, ordinary folks suddenly discovering something super inside.

As a result my son for some time now has been relegated to stories I’ve retold him about the Scarlet Speedster, a few short YouTube clips during some weak moments as a parent, and his own bursting imagination.

But this weekend, it was time — time to take him to a comic shop and to let him marvel at this fantastical universe inside its walls.

When we walked in, the glass display case in the store’s center had vibrant DC hero collectibles, and there among Batman, Superman, Catwoman, and Harley Quinn was The Flash. He was in awe — starstruck and overwhelmed. He was vibrating with excitement. I remember feeling that exact way when I first walked into a comic shop and discovered just how many worlds and heroes existed beyond my subscription to The Mighty Thor.

In my mind, comic shops were places where you fell in love not just with superheroes or storylines but where you also became a part of an entire beautiful and welcoming culture. I spent hours thumbing through comics not only in hopes of finding a new series or character to pique my interest but also just to spend a few extra minutes in the comic shop itself. It was place of neverending possibility and imagination, of worlds yet undiscovered but still existing on newsprint in color (although some have passed on to the Great Comic Shop in the Sky; RIP Malibu Comics, Ultraverse, Strangers, and Freex.)

It had been years since I visited a comic shop, but I was looking forward to introducing my kids to this treasured place, to give them a chance to see if it was a culture they might find a place in too. My youngest especially could benefit from a culture that had a reputation for valuing imagination, creativity, and folks who marched to their own tunes.

But within a minute of arriving at the comic shop, it became clear my kids weren’t welcome there, and that I’d transgressed some sacred law by bringing them into the shop. The best we could hope for would be scornful toleration, a quickly-give-us-your money-and-leave mentality. Almost immediately, my awestruck child and I were shepherded away from amazing displays, merchandise, and comic racks and to a tiny afterthought of a corner for kids.

The only thing a comic shop employee said to my kid who was thrilled and amazed just to be there was “Don’t touch anything, but especially not that. The kids stuff is over there.”

And that’s when I realized, if this is what comic shops have become, then comics are dead.

They might be enjoying something of a renaissance with the endless march of Marvel and DC films in theaters, ComicCons,  the rampant commercialization and toys in stores, and serious writers like Ta-Nehisi Coates writing new storylines for characters. But when a wonderstruck kid isn’t welcomed into a comic shop, a place whose very reason for existence is wonder, then the culture of comics I loved may well be dead or at least be infected with something deadly: a culture of exclusivity and inhospitable rigidity.

I’ve had octogenarian antique shopkeepers greet my children with much more welcome than this comic shop, and they were minding crystal and centuries-old porcelain tchotchkes not drawings of superheroes and literal toys.

I know this sounds like a rant, but I don’t mean it to be. It’s entirely possible my experience was a one-off or can be chalked up to one employee’s bad day at one store. Nobody’s perfect. Everyone deserves an off-day, and it’s unfair to judge all comic shops by one experience. I get that. So we will go back at least once and we’ll try other shops in town. But it’s worth noting that I’m not the only parent who has noticed a deep shift in comic culture as we consider introducing our own children to it. In fact, some comic fans laud the idea that comics are for adults only, not for kids.

But mostly it has gotten me to think about the connections between comic shops and the church, both supposed havens for wonder, for the outcast, and for believing in the impossible. More than anything about comic culture itself, I began reflecting not just on how the church welcomes children or teenagers, but also how it welcomes those new to the entire experience. We are ministering in a culture in which church is becoming an increasingly foreign experience for many people. How do we welcome folks who are new to the entire experience and curious about it, who walk through the doors hoping to find a place where their wonder can swell and join with other? Do they find folks eager to bring them in, introduce them to a new world of wonder and welcome? Or do they find folks policing the boundaries, making sure nothing gets broken or smudged, and funneling them to an unimportant corner where they won’t mess anything up?

A culture dies when it can’t welcome the unfettered wonder of a child or the curiosity of newcomer. It dies when it won’t include those new, who might not know the rules, but who nonetheless walk through the doors for the first time eager to be a part of its promise of wonder.

It dies when we respond to someone’s wonder, curiosity, and excitement with an annoyed, “Don’t touch.”

Don’t touch communicates one thing very clearly: This experience doesn’t belong to you. It belongs to me.

It’s worth remembering how Jesus responded when the disciples attempted to shepherd the children away from him, to prevent their grubby, jammy little hands from touching Jesus. He rebuked the disciples and embraced the kids.

It’s an ethic that extended beyond children and to the curious in general, like when Jesus responded to Bartholomew’s wonder and curiosity under the fig tree. Jesus didn’t get annoyed, tell him to go away, or ridicule him. He didn’t tell him not to touch anything.

Instead he simply said, “Come and see.”

“Come over here. Come closer. Come and check this out. It’s a marvel to behold.”

May 26, 2016
Keep Christianity Weird: The Trinity, Mermaids, UFOs, and Holy Strangeness
Next Post