“I am so sorry.” The words came slowly, like a hardened tube of glue, squeezed out slowly from the bottom.

His eyes brimmed with tears and he shook with shame. He wore the tattoos that showed his company pride, battles fought in a far-away land. But the biggest fight of his life was being fought in front a group of strangers that he had wronged.

“I can’t drink. I shouldn’t drink. It makes … do things.” That was an understatement. In the middle of the night he and two others had burst into our campsite, screaming, full of anger. One girl in our party was sleeping in the back of a pickup. They put their lights into her face, full of assumption and hate. The liquor screamed terrible things.

Others came out, rushing to her defense. Some tried talking sense, but there was no point in reasoning with senselessness.

All three were veterans and were quite vocal that they had fought for our freedom to camp that weekend.  It’s true – that our rights come at heavy price. But these men wore their heroism like chains.

They all rushed off into the night. But this one crawled back the next morning, his head heavy with the wooden affect of the drink. Still, he had to set things right.

The father of the daughter stood close to the man – smelling the stale breath, hearing the confession.

It wasn’t easily received. After all, his daughter had been threatened. Terrible words were spoken.  But the dad uttered the words. “I forgive you.” But he followed up with the most difficult question for the man to wrestle with. “Do you know why?”

Peter came to Jesus, complaining of repeat offenders. The same people, who never learned their lesson it seemed. Always saying the wrong thing. Always doing the wrong thing. At some point, “we have to cut them off, right?”  Peter suggested a limit of seven. That seems generous enough.

But Jesus shook his head at the suggestion. Seven times seventy. A figure that connotes an unending supply of forgiveness, modeled after the Father.

We try to find a rule for others to live by and then an escape clause when it applies to us. Our debt wiped off the board, but so unwilling to extend the same grace to others.

When we don’t forgive, we are handed off to the jailer. Trapped by our own pride and stubbornness. Smug, we may be right, but we are prisoners.

One by one we gathered around this young vet, a man shaken by war, running from the demons of his memory. First one hand, then another. A dozen hands praying over his torture, casting back the voices in the name of One who’s name caused them to tremble.

Eyes wet we opened them to a dawn of forgiveness.

We all went about our way, hoping to settle into the fun of the day, after all it was the 4th of July Day.

We spent the day on the water and laughing. In the evening the BBQ  sent smoke signals to the sky, telling the world that we were celebrating Independence Day.

It was hard to shake the drama from the previous evening.  None of us knew where that man really was, we were hopeful that he would be finding the healing of forgiveness.

As the darkness came, there would be no fireworks display, a price for being in the mountains and the dry tinder. But one boy at the campsite created his own show, waving a sparkler around and around in a happy dance. He yelled loud enough for the world to hear one word.

August 8, 2014
Patience: How to Embrace This Place
Next Post

Evangelical
How to escape the secret life of shame
David Rupert 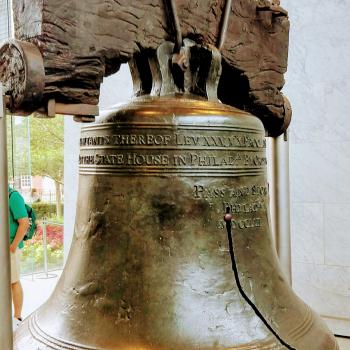 Evangelical
The Dangerous Trend Toward Suppression of Speech (Our...
David Rupert
TRENDING AT PATHEOS Evangelical