When I was seven, I knew a lot about bikes and Lincoln logs and lunch.  I didn’t know much about life.

There were the rituals, waking up for school, eating oatmeal with a drizzle of honey,  sitting in the class, dreaming of recess and riding my bike after school.

But life?  What was that? It was eating and breathing and always knowing my Mom was close by. Was there more?

I didn’t know about the struggles of those around me. I didn’t taste sickness or death. I was oblivious to the hatred at lunch counters or school buses. I hadn’t heard of the shootings at Kent State. I had heard of the war in Asia, but it never meant a thing to me. I was ignorant of the world and its troubles.

But I had bliss in my brother, my mom and dad, my friends in the neighborhood and school, and in my few toys. There was a coming of age when I found something that would bring me even more happiness.

My birthday was coming and all I wanted was a puppy.  My friend Jill had a big lazy lab that laid on the front porch. And Andre down the street had a beagle that howled at the birds. But I wanted a fun dog that would play fetch and greet me at the door and sleep in my bed. That’s the kind of dog I wanted.

We went to the pound, because that was the kind of people we were.  My dad explained to the clerk that we just wanted to look. No commitment. We opened the heavy gate and the smell hit me like a wave.  And the sound – dogs on suddenly on alert howled and yelped and yipped and barked. We were both intruders and rescuers, but to my ears all the barks sounded the same.  I was scared, but this was the path to reaching my goal. I hung in there. 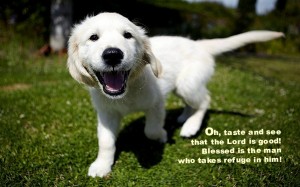 I looked over the choices.  There was a big dog that I’m sure I could have ridden like a horse. And another with big deep fur that mother would have hated vacuuming but I would have loved to sleep on cold winter nights. There was a fetcher, a growler, a bruiser, and a scrapper. But my eyes caught  one little guy who hung back from the commotion. He let the others throw themselves at the fence in crazed ecstasy, but he stood shyly, turning his face, and wagging his tail.

Here I am many years removed from that day. I’ve had some bad things happen. Some sadness. Some pain.  I’ve lost love and friends and loved ones .I’ve experienced the dark side of life.

And now I’ve gained all of that back — and then some. I’m finding that I am still a seven-year old at heart, longing for the simple joys, the happy days, the joyous laughter.  Bliss. It’s never too late.

I make choices every day. And once again, I’m ready to choose the one with a happy ending.

July 16, 2014
"What were you thinking?" Overcoming the pains of regret
Next Post

July 25, 2014 Straight Lines Matter: Choosing Order Over Chaos
Recent Comments
5 Comments | Leave a Comment
"And yet, here you are in an forum for Evangelicals, reading.Of course, the responsibility for ..."
David Rupert We are being Called to the ..."
"What a pathetic diatribe.A fantasy of the author who hates everything progressive, and IMAGINES how ..."
oneworlddude We are being Called to the ..."
"Great article. Many have been praying for the Afghanistan's and also for the Americans and ..."
David Boze Say a Prayer for Afghanistan
"I'm sorry for your loss."
Maine_Skeptic The Day I Walked Away: Finding ..."
Browse Our Archives
get the latest updates from
David Rupert
and the Patheos
Evangelical
Channel
POPULAR AT PATHEOS Evangelical
1

Answer to Question: What Must a...
Roger E. Olson
Related posts from David Rupert