Waiting for a miracle for Blessed George Matulaitis 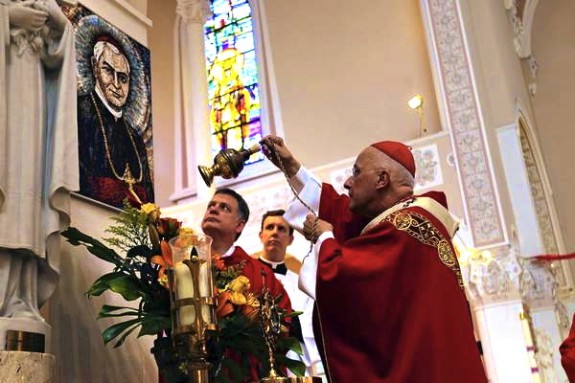 He has a loyal and devoted following in Chicago, where a significant anniversary on his path to sainthood was celebrated this weekend:

If a group of local Catholics have a say in the matter, the late Archbishop George (Jurgis) Matulaitis could soon join the saintly ranks of Michael the archangel, Joan of Arc and John the Baptist. All they need is a miracle.

About 250 people gathered at Nativity of the Blessed Virgin Mary Catholic Church on Sunday afternoon to mark the 25th anniversary of the year the Lithuanian priest moved one step closer to being considered a saint by the Catholic Church.

Pope John Paul II declared Matulaitis “blessed” in June 1987 after the Catholic Church found a miracle associated with his name.

Now, supporters of Matulaitis hope someone else will come forward with a miracle he or she experienced after praying to God, using Matulaitis as an intermediary. If a second miracle is found and approved by Catholic authorities, then Matulaitis could be considered a saint.

“If it is the will of God, we hope very soon that he can (attain) sainthood,” Joseph Roesch, the vicar general of the Marian Fathers of Immaculate Conception, who oversees a Lithuanian parish, told the audience at Blessed Virgin Mary.

Achieving sainthood in the Catholic Church is a difficult endeavor that can last years after a person’s death, priests at the Nativity celebration said. First, a candidate’s legacy and character have to be researched to prove that he or she lived a holy life.

Then church officials must find two cases where someone experienced a miracle after praying to God using the candidate’s name. The miracles are often medical in nature, but church officials will verify with doctors that there is no other natural or scientific explanation for the miracle.

In Matulaitis’ case, a Lithuanian woman said she received instantaneous healing from varicose veins after she prayed to God with a prayer card attached to her leg featuring Matulaitis.

“The healing came from God,” Roesch said. “(But) for us it’s the saints, that are the intercessors.”

Matulaitis, who was born in 1871 and died in 1927, had bone tuberculosis and wore a leg brace for much of his life, priests said. He visited Chicago’s Lithuanian community, but he spent his life in the Eastern European nation.

Matulaitis, who was an orphan, paid much attention to parentless children during his ministry, said Kaz Chwalek, provincial superior of the Marian Fathers of Immaculate Conception, who was there at his beatification 25 years ago.

May 28, 2012 VatiLeaks whistleblower: "The pope is in despair"
Recent Comments
0 | Leave a Comment
"I think I would have been happier had the CDF handled the nuns the way ..."
Theodore Seeber Vatican challenges “interpretation” of cardinal’s remarks ..."
"Blaming "Islamics" for this is like blaming the Pope for the Holocaust Denial of Hutton ..."
Theodore Seeber One killed, 44 injured in Catholic ..."
"It smacks to me of hyper-sensitivity, a veiled spiritual and intellectual pride, with regards to ..."
J D Pope Francis: “A Christian who complains, ..."
"Oh, no, we never change our mind, and we always agree, even on points of ..."
Ron Chandonia Vatican challenges “interpretation” of cardinal’s remarks ..."
Browse Our Archives
Follow Us!

About the 22 Catholic Factions
https://www.youtube.com/watch?v=ABXtWqmArUU I apologize once again for the radio static this month. The...
view all Catholic blogs
What Are Your Thoughts?leave a comment