Does the Holy Spirit pick the pope? Ratzinger didn’t think so. 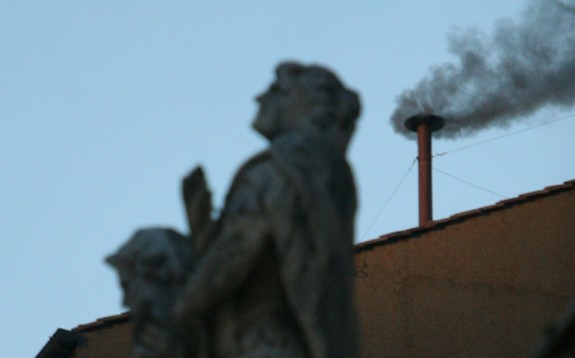 Some more great context and insight on the upcoming conclave from NCR’s John Allen:

People typically ask two kinds of questions about conclaves: those that deal with the event in general and those that pertain to this one specifically — who the leading candidates are, what the issues seem to be, and so on. We’ll deal with the latter soon enough, but first, it’s important to grasp how the behind-the-scenes politics work.

Ideally, this exercise in “Conclave 101″will help make sense of what we’ll be seeing and hearing between now and that magic moment when white smoke rises from a small chimney above the Sistine Chapel, proclaiming to the world that a new pope has been elected.

(That’s probably a first insight worth offering: The white smoke isn’t always so white. A chemical mix is used to make burned ballots either turn black, signifying an inconclusive vote, or white, meaning that we have a pope. In reality, the result is often an indistinct gray. In 2005, the Vatican said bells would also ring when a pope had been elected, but bells ring in Rome all the time, so that doesn’t always add much clarity. Generally, it takes a few minutes to sort out what’s actually happened.)

Before we begin, let me say a word about the traditional Catholic conviction that a conclave unfolds under the guidance of the Holy Spirit. In 2005, this idea was summed up by Cardinal Ennio Antonelli of Florence, who said God already knew who the new pope was, so it was simply up to the cardinals to figure out what God had already decided.

Some pious souls take that to mean that it’s inappropriate, even borderline heretical, to suggest that politics are involved. Yet Catholic theology also holds that “grace builds on nature,” meaning that the spiritual dimension of a papal election doesn’t make it any less political.

Anyway, one shouldn’t exaggerate the role of divine inspiration. As one cardinal put it to me after the election of Benedict XVI, “I was never whapped on the head by the Holy Spirit. I had to make the best choice I could based on the information available.”

Perhaps the classic expression of this idea belongs to none other than the outgoing pope, Benedict XVI, who as Cardinal Joseph Ratzinger was asked on Bavarian television in 1997 if the Holy Spirit is responsible for who gets elected. This was his response:

I would not say so, in the sense that the Holy Spirit picks out the Pope. … I would say that the Spirit does not exactly take control of the affair, but rather like a good educator, as it were, leaves us much space, much freedom, without entirely abandoning us. Thus the Spirit’s role should be understood in a much more elastic sense, not that he dictates the candidate for whom one must vote. Probably the only assurance he offers is that the thing cannot be totally ruined.

There are too many contrary instances of popes the Holy Spirit obviously would not have picked!

There’s much more on “Conclave 101” at the link.  Bookmark the “Benedict Resigns” web page for the latest analysis and news.

Allen in a separate posting notes a growing critical tone among some cardinals, who have expressed their dissatisfaction with Pope Benedict’s management skills:

Throughout Benedict’s papacy, [Secretary of State Cardinal] Bertone shouldered much of the blame for what is widely perceived as a series of gaffes and meltdowns. He’s become the leading symbol of the convention wisdom that Benedict has been a great teaching pope, but a mixed bag as a governor and administrator.

In 2009, a global tempest erupted following Benedict’s decision to lift the excommunications of four traditionalist bishops, including one who turned out to be a Holocaust denier. Benedict was compelled to send an anguished letter to the bishops of the world, apologizing for mishandling the affair but also grousing about the bitter backlash it generated.

Insiders blamed Bertone for not seeing the train wreck coming, which was the context for Meisner’s effort to get Benedict to cut him loose.

According to the interview in the Frankfurter Rundschau, [Cologne Cardinal] Mesiner told Benedict: “Your Holiness, you have to make Cardinal Bertone resign! He has the responsibility, like in a secular government.’

According to Meisner, Benedict’s response was: “Listen to me carefully. Bertone will remain! Enough, enough, enough.”

“After that, I didn’t bring up the subject again,” Meisner is quoted as saying. “It’s typical: The Ratzingers are loyal, and that doesn’t always make their life easy.”

To be sure, this was not a direct criticism of Benedict – on the contrary, Meisner seems to admire his loyalty to his friends. Yet it certainly is a critique of the team around Benedict, and perhaps a not-so-subtle hint that the next pope needs to have a better eye for managerial talent, and a more robust sense of accountability for poor performance.

February 17, 2013
Report: Pope Benedict last summer indicated "not much more" could be expected of him
Next Post

February 17, 2013 Under the dome: a glimpse inside "the management crisis" within the Vatican
Browse Our Archives
Related posts from The Deacon's Bench