Dolan: “Highly possible” next pope will not be from Europe

Dolan: “Highly possible” next pope will not be from Europe February 21, 2013 Deacon Greg Kandra 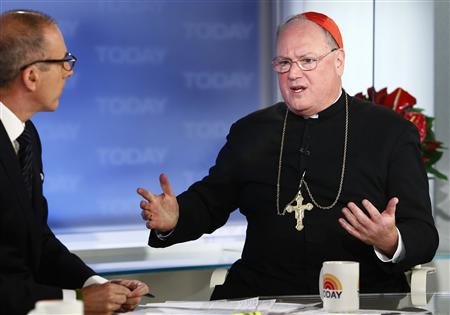 CardinalTimothy M. Dolan, the Roman Catholic archbishop of New York, said on Tuesday that he believed it was “highly possible” that the next pope could come from a non-European country.

“When I was growing up, it was presumed the pope would be an Italian,” Cardinal Dolan said, discussing next month’s conclave to elect a new pope during his live radio show, “Conversation with Cardinal Dolan,” on Sirius XM satellite radio. He said that, when Karol Wojtyla of Poland was elected pope (he took the name John Paul II) in 1978, “that was thought to be an earthquake.”

As he has since Pope Benedict XVI announced his resignation on Feb. 11, Cardinal Dolan, 63, played down the idea that he might himself be chosen as the next pope.

“I could be the next shortstop of the Yankees too,” he said. “Anything is possible!”

Meantime, a columnist in the Boston Globe — the former mayor of Miami, in fact—turns his attention to another American cardinal getting some serious attention, Sean O’Malley and explains why he should be pope:

I met Sean O’Malley in the 1970s, when he was just a humble Capuchin friar ministering to the poorest and most marginalized Hispanics in the nation’s capital. He had been sent by his order to head the Spanish Catholic Center, and he took the assignment seriously enough that he found an apartment in the same dilapidated, tenement-style building where the offices of the center were located.

O’Malley rejuvenated the Spanish Catholic Center. He quickly attracted the best and the brightest of the Hispanic professionals in Washington; soon the center offered not only English-as-a-second-language classes, but also a free dental and medical clinic.

Many of the professionals he attracted belonged to Agrupación Católica Universitaria, a Cuban-based Catholic organization founded by the Jesuits in Cuba to help university students pursue studies in theology and philosophy. Soon, as D.C. chaplain of the ACU, he was embraced as a member of the organization and given the medal of full-fledged “agrupado,” or congregant.

He was unofficially but universally recognized as Hispanic, and it didn’t hurt that he had obtained a doctorate in Spanish and Portuguese literature at Catholic University. Those of us who were educated there were often flabbergasted when he outperformed us in Spanish fluency…

…His participation in the 1980s in the Central American post-insurgency treaty known as Esquipulas II culminated with well-received testimony to Congress. As the only fully bilingual bishop in the delegation sent to Central America by the US Conference of Bishops, his understanding of the issues, the history, and the personalities involved was extraordinarily valuable in bringing the conflict to an end.

O’Malley relates well to Europeans, who control 62 eligible votes in the college of cardinals. It is true that 28 of those are Italians, but the trend does not favor an Italian to replace Pope Benedict XVI, since there is a recognition that diversity must be fostered — not to mention linguistic skills. O’Malley speaks fluent English, Spanish, Portuguese, and French. And, as far as sheer cultural diversity, who could be more diverse than an Irish-American who received his doctorate in Spanish and Portuguese literature?

There are all kinds of reasons given for Pope Benedict’s resignation, but the main reason, other than his health, is likely the clergy sexual abuse scandal. O’Malley played a big role in restoring confidence in the church after sexual abuse scandals in Fall River, Boston, and Ireland.

February 20, 2013
Pope Benedict's farewell to be broadcast live
Next Post

February 21, 2013 Who is the only living cardinal to have voted in three conclaves? —UPDATED
Browse Our Archives
get the latest from
Catholic
Sign up for our newsletter
POPULAR AT PATHEOS Catholic
1