The Vatican confronts the digital age 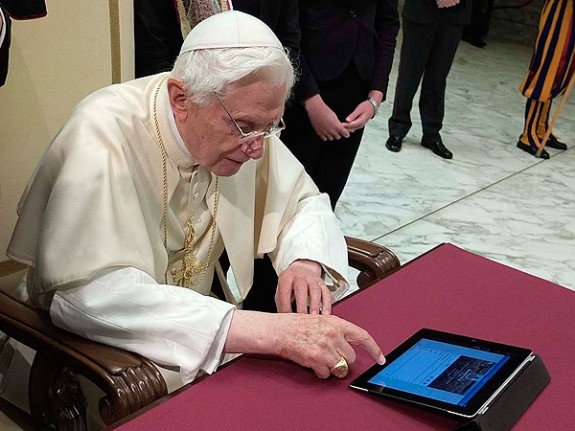 Is the changing media landscape becoming a growing problem for the church?  One writer thinks so, and makes some compelling observations:

When Joseph Ratzinger became pope in 2005, the most common assumption (made by his fans and detractors alike) was that he’d continue in his role as an enforcer of theological orthodoxy. There were visions of a highly authoritarian papacy. Instead, his pontificate has been marked by a string of gaffes, scandals, and serious public relations blunders that have significantly diminished his stature and the moral authority of the church.

A few of the lowlights:

* In 2009, the pope rescinded the excommunication of four members of the heretical Society of St. Pius X, one of whom (Bishop Richard Williamson) is an outspoken Holocaust denier. In response to the ensuing controversy, the Vatican stated that it was unaware of Williamson’s anti-Semitic views, even though they are well documented online.

* Since 2010, the Vatican Bank has been under investigation by Italian authorities for money-laundering.

* In 2012, the pope’s butler was accused of stealing classified documents (allegedly demonstrating pervasive corruption inside the Vatican) and passing them along to an Italian journalist who subsequently published them in a tell-all book titled His Holiness: The Secret Papers of Benedict XVI.

As recently as a decade ago, such events would have attracted little notice outside of Italy. There might have been a single article in a newspaper, and the few people who happened to read it might have been annoyed and angered. But there would have been no widespread public outcry. Today, such news is instantly communicated to the entire world, leading to a constant drumbeat of scandal and controversy…

…Every moderately intelligent and articulate critic of the church around the globe now has access to information and the opportunity to express dismay and disgust on blogs and other websites. The nearly 2,000-year-old institution of the papacy — accustomed to moving at the pace of centuries — has no choice but to contend with these thousands of critics, many of them raising morally legitimate objections to this or that decision, questioning its wisdom, raising doubts in the minds of the faithful. It’s hard to imagine an institution less suited to mounting an effective defense against the critical onslaught.

Official Catholic Church Teaching on the...
The Shoeless Banshee: Meanderings Beyond the Pale
Books by This Author Books by Deacon Greg Kandra