How the media transformed the papacy 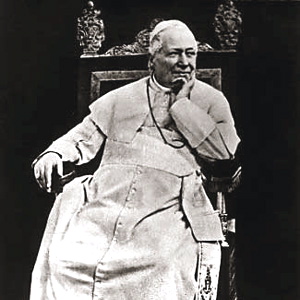 Jesuit Father Norman Tanner was our briefer today and was quite interesting. Father Tanner, a professor of church history at the Gregorian University, said that media played the most important role in redefining the modern papacy. He gave the example of Pope Pius IX (1846-1878), the first pope to be photographed, as the beginning of a cult of personality around the office of the papacy.

Other examples would be his successor, Leo XIII (1878-1903), first pope to be filmed, Pius XI (1922-1939), founder of Vatican Radio, and John XXIII (1958-1963), who became a world figure with his joyful personality and the media attention surrounding the opening of the Second Vatican Council. Father Tanner said the pope who elevated the papacy to an unprecedented level of media stardom was, of course, John Paul II. I would add that even Benedict XVI continued this development as the first tweeting pope.

March 11, 2013 Conclave: it's not just an election, it's liturgy, "a prayer from beginning to end"
Browse Our Archives
Follow Us!