Pope Francis: the medium and the messenger 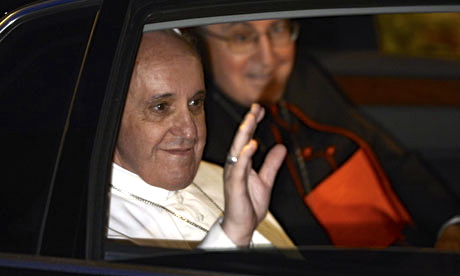 I do not write this from some naive expectation that “he will change church teaching,” as some like to say.  Rather, it is in the way he is approaching his ministry as Bishop of Rome (his preferred style of self-reference).  He is clearly a man of the people, and the people are responding in kind.  People who might be complaining that all he has done thus far is more “style” than “substance” are missing their Marshall McLuhan, that “the medium is the message.”  I also find an echo of John XXIII’s insight during his opening address to the Second Vatican Council, that religious truth is one thing, timeles and unchangable, but the ways and means by which we communicate that truth is quite another.  Where Pope Benedict was brilliant at communicating religious truth through the theological enterprise, Pope Francis is demonstrating through his earthiness.

A parishioner recently complained to me that she was upset about all of the media “hype” surrounding Pope Benedict’s retirement, the run-up to the conclave, and then the conclave itself.  She felt that all of this attention from the media trivialized the moment.  I can understand her concern, but at the same time, I felt completely the opposite: the world — and not just the Catholic world — was genuinely interested in what was going on and who might appear in the (black) shoes of the fisherman.  What I felt was the hunger of people who had often been disappointed by other people in the name of Church, but who still longed to be a part of all of the wonderful aspects of church that thrive despite our best efforts sometimes to sabotage.  Francis is emerging as the best example of a true pontifex  — builder of bridges — that we have seen in a long, long time.  I saw all of that media involvement as a marvelous example of evangelization at its best, an opportunity to be in dialogue with others about what matters most.

What Pope Francis will do in the future remains to be seen.  What he has already done has generated hope and enthusiasm for the papacy itself and the Church.  One person admitted to me recently that, as a gay man, he struggled with many aspects of the church’s approach to homosexuals.  I reminded him that he shouldn’t expect the new pope to make any substantive changes to the teaching itself.  He readily acknowledged that, but then said something quite remakarkable: “Oh, I understand that, Deacon.  But you know something?  There’s just something in this new pope’s approach that shows me that I am loved by God.  If the teaching doesn’t change, I can live with that because I know now that God loves me and that this pope truly cares.”

I think what Pope Francis is up to is trying to project, re-project, is an image of the Church as compassionate.  He is trying to help people remember (or learn for the first time) that she is actually all about compassion, charity in its truest form.

We’ve lost the message and we have to get it back.

For example , in his sermon for the Chrism Mass he indicated that priests need to be edgier, take more risks in getting out there with people.  He is probably thinking (like a Latin American bishop might with enormous slums in the diocese) that you depart from certain things for the sake of connecting elsewhere.  You risk being over-interpreted or losing control of the message for the sake of getting the real message out there again.

I’ll wager that, as a Jesuit, Francis doesn’t care about liturgy very much.  He is just not into – one whit –  either what traditional liturgy types or what liturgical liberals want.

Some liberals live and breathe liberal liturgy.  On the other end of the spectrum, such as the undersigned, traditional Catholics think that liturgy is critical but for different reasons (“Save The Liturgy, Save The World”, comes to mind). Francis isn’t invested in either of these camps.

For Francis, I think, it is more a matter of “a pox on both your houses”.

Putting it in a vague way, Francis wants people to leave Mass feeling “joy”, or something having to do with the “kingdom”, etc.  As he said at the Chrism Mass he wants people leaving Mass “as if they have heard the good news”.

Look.  I am not saying his is the right approach.  I am saying this is what I think he is doing in his liturgical and personal-style choices (where he is living, what chair he sits in, etc.).

Francis wants priests to talk to people and find out what they need and get involved in their daily struggles. Liturgy, for Francis, seems to be involved precisely in that. Do I think Francis may be missing huge points in this approach?  Sure, right now I do.  But I am leaving the jury out.

I don’t have to 100% embrace what Francis is doing even as I struggle to see and understand what I is up to.

I am quite sure, however, that Francis isn’t trying to ruin what Benedict and John Paul before him tried to construct. He is up to something else.  He is getting at the problem of the Church not making any headway in evangelization…

…Francis is pushing out to the world (ad extra) an image of compassion.  I think he is correcting both sides, within the Church (ad intra), which may both be, both sides, losing the forest for the trees: we are not succeeding in evangelizing and we cannot sacrifice doctrine for the sake of mere popularity or worldly acceptance.

Another assessment, from John Thavis:

With every act of his pontificate, Pope Francis seems to be demonstrating exactly what he meant when he told cardinals that the church needs to be less “self-referential” and more present in every environment of modern society.He explained that washing the feet was above all an act of humble service, and said it illustrated simply that “we need to help one another.”…

…“These young people will help me be more humble, to be a servant, as a bishop should be,” he said.

In other words, rather than drawing boundaries around this Catholic rite, he found a perfect way to make it accessible and understandable to all.

This is a smart way to evangelize. It’s not a smart way to woo traditionalists, as the reaction from some quarters has made clear – but that does not seem to be among the new pope’s priorities.

March 29, 2013 Homily for March 29, 2013: Good Friday
Browse Our Archives
get the latest from
Catholic
Sign up for our newsletter
POPULAR AT PATHEOS Catholic
1

Blessed Then and Now
She is preparing for confirmation this year. Thirteen years ago...She was born...
view all Catholic blogs
Copyright 2008-2021, Patheos. All rights reserved.
error: Content is protected !!