“This is a pope from Galilee” 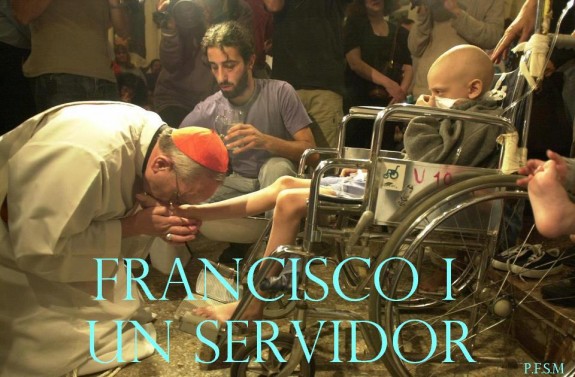 That’s what a French journalist said in 1978, when Karol Wojtyla became Pope John Paul II.  The cardinals hadn’t elected a man from Poland, he wired back to his office.  They’d picked one from Galilee.

More and more, I am getting the same feeling about Pope Francis.

One of the first things a new pope hears is, “Holy Father, it’s always done this way.”

In his first 24 hours in office, Pope Francis has already given indications that he may not be intimidated by those words, as he creates his own style of being pope.

That was clear from the moment he put on his papal robes, donning the simple white cassock but declining to wear the ermine-trimmed red cape known as the mozzetta, which was left hanging on the wardrobe in the Room of Tears.

To Vatican officials who offered him an elaborate gold pectoral cross to wear around the neck, he said he’d prefer to keep his very simple cross that he’s worn as a bishop. He accepted the congratulations of cardinals not seated on a traditional throne-like chair, but standing up and greeting them one by one.

After his blessing last night to the crowd in St. Peter’s Square and to the world, Vatican aides told the pope a limousine was waiting to take him to his temporary quarters in the Vatican’s residence building. The new pope said he’d rather take the bus back with the cardinals – and he did.

This morning, the pope’s first act was to leave the Vatican for an impromptu visit to the Basilica of Saint Mary Major in central Rome. No doubt someone told him: “But Holy Father, we need time to plan these visits very carefully.” He wisely didn’t listen. Yes, his presence snarled traffic and caused a major stir, but the Romans loved it.

Instead of taking the main car in the papal fleet, a Mercedes with the “SCV 1” license plate, he rode in a more modest sedan.

On the way inside the basilica, he stopped to wave to high school students across the street. After praying before a popular icon of Mary, he told confessors at the church to “be merciful, the souls of the faithful need your mercy.”

March 14, 2013 Who's that guy with the white hat?
Browse Our Archives
get the latest from
Catholic
Sign up for our newsletter
POPULAR AT PATHEOS Catholic
1