What sort of man are the cardinals looking for in the next pope?

What sort of man are the cardinals looking for in the next pope? March 4, 2013 Deacon Greg Kandra

There’s got to be an identification with Jesus as shepherd of his church. The mystery of Jesus is infinite, but there’s a certain dimension of it that’s particularly necessary for being a pastor. Quite apart from personal sanctity, you have to know Jesus enough to represent him to his people, so it’s governance. The issue is governance here. 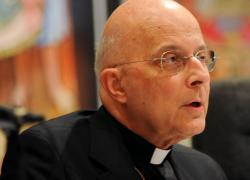 He also has to know the people. I’ve tried to say again and again, he has to have a heart for the poor around the world. Most Catholics live in poorer countries, and their agenda is very different. In those countries, the church is a beloved institution.

If you go to the world’s poor, who aren’t going to be on our television sets because they don’t know English and they haven’t had a liberal education, but if you go to the poorest of the poor and ask them about the Catholic church, they love the church. If you ask them about any country, their own or ours, it’s a very different response. The church is a beloved institution among the people who count, who are first in the Kingdom of God. We can forget that too often, in my own country in particular.

The next pope must have a sense of that, among other things just to keep himself encouraged. It’s a reminder that it does work, the mission is working. The gospel is preached, the sacraments are administered, people are gathered into communities of love. It works. He has to have the confidence born of that sense, that experience, that sort of experience, which will enable him to have the courage that John Paul II showed in addressing the world, and that every evangelist shows. You can’t start out all the time fighting with one had behind your back. When there is a fight, you have to present the fullness of the truth.

There’s much more and it’s worth the read.  Check it out.

March 3, 2013
Before and after: a Texas church reborn
Next Post

March 4, 2013 Benedict makes the cover of the New Yorker
Browse Our Archives
get the latest from
Catholic
Sign up for our newsletter
POPULAR AT PATHEOS Catholic
1

Render Unto to Ceasar ... What...
Public Catholic
Books by This Author Books by Deacon Greg Kandra

Problem of Evil & of Good: Great Dialogue...
This began when "axelbeingcivil" started the discussion on my blog, on 7-7-21....
view all Catholic blogs
Copyright 2008-2021, Patheos. All rights reserved.