“Women have a special role in opening doors to the Lord”: Pope Francis speaks on women in the Church

“Women have a special role in opening doors to the Lord”: Pope Francis speaks on women in the Church April 3, 2013 Deacon Greg Kandra 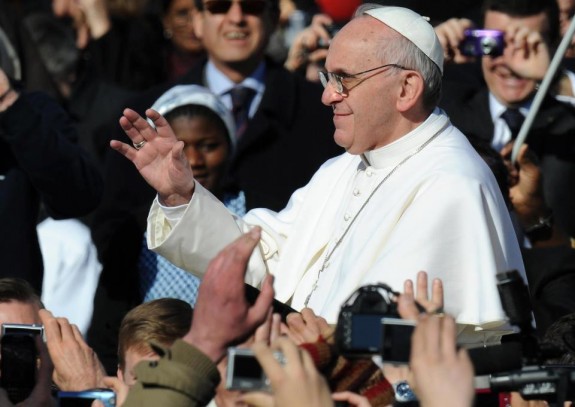 Text from the Vatican:

Another element. In the professions of faith of the New Testament, only men are remembered as witnesses of the Resurrection, the Apostles, but not the women. This is because, according to the Jewish Law of the time, women and children were not considered reliable, credible witnesses. In the Gospels, however, women have a primary, fundamental role. Here we can see an argument in favor of the historicity of the Resurrection: if it were a invented, in the context of that time it would not have been linked to the testimony of women. Instead, the evangelists simply narrate what happened: the women were the first witnesses. This tells us that God does not choose according to human criteria: the first witnesses of the birth of Jesus are the shepherds, simple and humble people, the first witnesses of the Resurrection are women. This is beautiful, and this is the mission of women, of mothers and women, to give witness to their children and grandchildren that Christ is Risen! Mothers go forward with this witness! What matters to God is our heart, if we are open to Him, if we are like trusting children. But this also leads us to reflect on how in the Church and in the journey of faith, women have had and still have a special role in opening doors to the Lord, in following him and communicating his face, because the eyes of faith always need the simple and profound look of love. The Apostles and disciples find it harder to believe in the Risen Christ, not the women however! Peter runs to the tomb, but stops before the empty tomb; Thomas has to touch the wounds of the body of Jesus with his hands. In our journey of faith it is important to know and feel that God loves us, do not be afraid to love: faith is professed with the mouth and heart, with the word and love.

April 3, 2013 "I always ask God to grant me a meek heart..."
Browse Our Archives
get the latest from
Catholic
Sign up for our newsletter
POPULAR AT PATHEOS Catholic
1