Pope Francis on Apostolic Zeal: “If We Annoy People, Blessed Be the Lord…”

Pope Francis on Apostolic Zeal: “If We Annoy People, Blessed Be the Lord…” May 16, 2013 Deacon Greg Kandra

A report on today’s homily:

Saint Paul was the focus of Pope Francis’ homily at Mass Thursday morning, and in particular his talent at ‘being a nuisance’, at unsettling people who had grown too comfortable in their faith and imbuing within them that Apostolic zeal that is necessary for the Church to move forward. 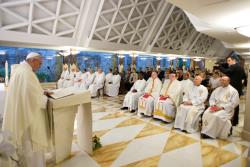 Pope Francis said that Apostolic zeal, implies “an element of madness, but of spiritual madness, of healthy madness” and proclaiming Christ has its consequences, which can often result in persecution. Nonetheless, stated the Pope, we must not be ‘backseat Christians’ cozy in our comfort zones.

Drawing inspiration from the Acts of the Apostles, chapter 22, where Paul was brought before the Sanhedrin, Pope Francis pointed out that the life of the Apostle to the Gentiles was one of “persecution”, but that this did not discourage him. The fate of Paul, he stressed, “is a fate with many crosses, but he keeps going, he looks to the Lord and keeps going”:

“Paul is a nuisance: he is a man who, with his preaching, his work, his attitude irritates others, because testifying to Jesus Christ and the proclamation of Jesus Christ makes us uncomfortable, it threatens our comfort zones – even Christian comfort zones, right? It irritates us. The Lord always wants us to move forward, forward, forward … not to take refuge in a quiet life or in cozy structures, no?… And Paul, in preaching of the Lord, was a nuisance. But he had deep within him that most Christian of attitudes: Apostolic zeal. He had its apostolic zeal. He was not a man of compromise. No! The truth: forward! The proclamation of Jesus Christ, forward! “.

Pope Francis noted that St. Paul was a “fiery” individual, but this fire was not limited to his character. It was the fire of his zeal for the Lord, who accompanied the Saint in his ‘pitched battles’. Indeed, continued the Pope, it was the Lord who lead him “onwards,” to bear witness in Jerusalem and in Rome:

“By the way, I like the fact that the Lord has cared for this diocese, even since then … We are privileged! And Apostolic zeal is not an enthusiasm for power, for possession. It is something that comes from within, that the Lord wants from us: Christian with Apostolic Zeal. And where does this Apostolic Zeal come from? It comes from knowing Jesus Christ. Paul found Jesus Christ, he encountered Jesus Christ, but not with an intellectual, scientific knowledge – which is important, because it helps us – but with that first knowledge, that of the heart, of a personal encounter. ”

Pope Francis continued, this is what pushes Paul to keep going, “to always proclaim Jesus”. “He was always in trouble, not in trouble for troubles’ sake, but for Jesus, proclaiming Jesus “this is the consequence”. Apostolic zeal, the Pope stressed, can only be understood “in an atmosphere of love.” Apostolic zeal, implies “an element of madness, but of spiritual madness, of healthy madness”. Paul “had this healthy madness.”

The Pope invited all those present to pray to the Holy Spirit for this Apostolic zeal that is not only the preserve of missionaries. Even in the Church, he warned, there are “lukewarm Christians” who “do not feel like moving forward”:

“There are backseat Christians, right? Those who are well mannered, who do everything well, but are unable to bring people to the Church through proclamation and Apostolic zeal. Today we can ask the Holy Spirit to give us all this Apostolic fervor and to give us the grace to be annoying when thin are too quiet in the Church the grace to go out to the outskirts of life. The Church has so much need of this! Not only in distant lands, in the young churches, among people who do not know Jesus Christ, but here in the cities, in our cities, they need this proclamation of Jesus Christ. So let us ask the Holy Spirit for this grace of Apostolic zeal, let’s be Christians with apostolic zeal. And if we annoy people, blessed be the Lord. Onwards, as the Lord says to Paul, ‘take courage!’ ”

Thursday Mass was concelebrated by Cardinal Peter Turkson and Bishop Mario Toso, president and secretary of the Vatican Council for Justice and Peace. It was attended by Council staff and staff from Vatican Radio.

May 15, 2013
Ordination Update: 16 New Deacons for Baltimore
Next Post

May 16, 2013 Reports of Rise in Confession: The Francis Effect?
Browse Our Archives
get the latest from
Catholic
Sign up for our newsletter
POPULAR AT PATHEOS Catholic
1