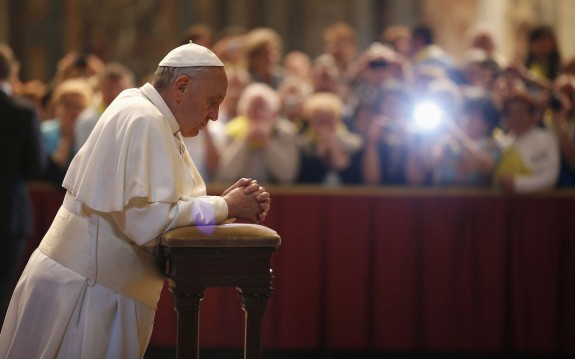 Pope Francis prays at the tomb of Blessed John XXIII.

And for the first time in nearly 60 years, not one but two popes are about to become saints.

Journalists in the Holy See Press Office busy getting to grips with Pope Francis’ first encyclical the Light of Faith, were somewhat surprised Friday lunchtime when Director Fr. Federico Lombardi S.J. called them back for a second announcement: Pope Francis had approved the cause for canonization of two of his venerable and much loved predecessors Blessed John XXIII and Blessed Pope John Paul II.

Meeting with Cardinal Angelo Amato, Prefect of the Congregation for the Cause of Saints, Friday morning, Pope Francis approved the promulgation of the decree and also convoked a special Consistory of the College of Cardinals to discuss the canonization of the Polish pope in depth.

Furthermore, he approved the favorable votes of the Ordinary Session of the Congregations Cardinals and Bishops regarding the raising to the altars of sainthood of Blessed John XXII.

This slightly unusual gesture was explained by Fr. Lombardi who told journalists that despite the absence of a second miracle it was the Pope’s will that the Sainthood of the great Pope of the Second Vatican Council be recognized.

Fr. Lombardi stated that a canonization without a second miracle is still valid, given that there is already the existing miracle that lead to the Roncalli Pope’s beatification. He also pointed to ongoing discussions among theologians and experts about whether it is necessary to have two distinct miracles for beatification and canonization. Certainly, he added the Pope has the power to dispense, in a Cause, with the second miracle.

However, there was no mention of dates. Neither for the Consistory nor for the Canonizations. Fr. Lombardi did not rule out that both celebrations could coincide, and he did express his belief that they would take place by the end of the year. Either way any date would be established during the Consistory.

There are several likely reasons for waiving the second miracle requirement for the canonization of Pope John XXIII, and the first is timing. The Vatican spokesman, Father Federico Lombardi, noted the ongoing 50th anniversary of the 1962-65 Second Vatican Council, convened by John XXIII. The spokesman added that John XXIII was much loved throughout the church, and that “none of us has any doubts about John XXIII’s virtues.”

It’s hard to believe that this decision does not reflect Pope Francis’ priorities, and his eagerness to revitalize the spirit of dialogue and interaction with the world that was characteristic of Vatican II and John XXIII.

Canonizing the two popes together would also create a broad-based, unifying event for the Catholic Church at the beginning of Pope Francis’ pontificate. It would show that sainthood, like the church, has room for very different models of holiness. On a more practical level, I think dual canonization would mute some of the criticism of John Paul II, particularly by those who believe he did not do enough to counter clerical sex abuse.

July 5, 2013
Müller: No Need for Non-Sacramental Women Deacons
Next Post

July 5, 2013 Is the Hulk Catholic?
Browse Our Archives
get the latest from
Catholic
Sign up for our newsletter
POPULAR AT PATHEOS Catholic
1