Pope Makes the Cover of TIME—But Not in the U.S. 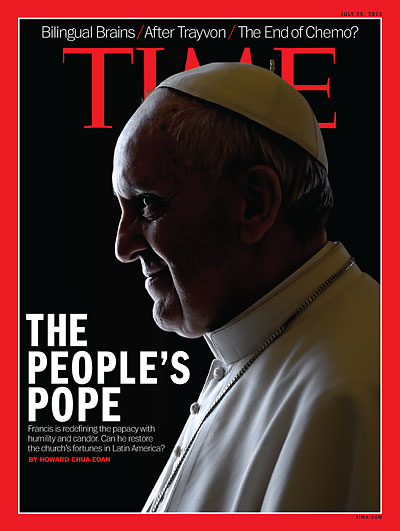 First the Italian edition of Vanity Fair and now Time magazine. Time has dedicated the front cover of its 29 July issue to “The People’s Pope”. But only the front covers of  the European, Asian and South American editions.

The U.S. edition has dedicated its front cover to the Trayvon Martin case …

The cover of the other editions, shows a close-up profile picture of Francis who is smiling and seems to be looking out of a window. His profile image is set against a shadowy background with a light illuminating the outline of his face and his white vestments.

The subtitle says Francis is redefining the papacy with his humility and candour and asks whether he will be able to turn Latin America’s destiny around.

Meanwhile, a snippet from the TIME article on Francis:

Francis’ unabashed championing of the poor and his criticism of the heartlessness of financial markets have had the effect of returning the church to its ancient strength: the pursuit of social justice. The pronouncements have recalibrated the church’s engagement with the world away from the enervating scandals of priestly sexual scandal. Cardinal Joseph Ratzinger may have tried to clean up the mess after he became Pope Benedict XVI, but he was too much part of the tainted bureaucracy to effectively reform the church–or alter public attitudes about the sincerity of the Vatican’s contrition. Francis may yet be hobbled by the controversies: the U.N. Committee on the Rights of the Child has requested that the Vatican “provide detailed information on all cases of child sexual abuse committed by members of the clergy, brothers and nuns.” In the meantime, however, he seems to have moved to investigate new allegations.

He has also apparently withdrawn from active participation in debates over sexual morality and biology, raising few public arguments over the right to life and making only passing reference to gay marriage despite loud protests from the French church as Paris legalized it. The singer Elton John, who is gay, has praised him.

It is not that Francis is about to change church doctrine on those matters–he is not. His first encyclical was actually written for the most part by the conservative Benedict, who lives in retirement in the luxurious Vatican Garden. Francis merely put his imprimatur on it with an innocuous sentence or two praising the Pope emeritus. Their differences are mainly matters of style. When Francis said that atheists could find themselves in paradise, his message was in line with a long tradition of church teachings and the words of Benedict himself. But where Ratzinger would have taken carefully parsed paragraphs to make the case, Bergoglio delivered it simply and clearly as a conclusion. The Pope emeritus too dined with the poor during his reign and, unprecedentedly, met with and consoled victims of priestly abuse. But his approach was all too cerebral, hampering his efforts. “Pope Benedict was classical music,” says Dodaro. “Pope Francis is folk. Both are beautiful, but they’re very different types of music.”

Read more on The Pope of the Poor.

July 20, 2013 The Father Who's a Father: Meet the Priest Behind This Iconic Picture
Browse Our Archives
Follow Us!

The Conversion of Zacchaeus
On five Sundays preceding the Great Fast, the Byzantine tradition prepares its...
view all Catholic blogs
Copyright 2008-2017, Patheos. All rights reserved.