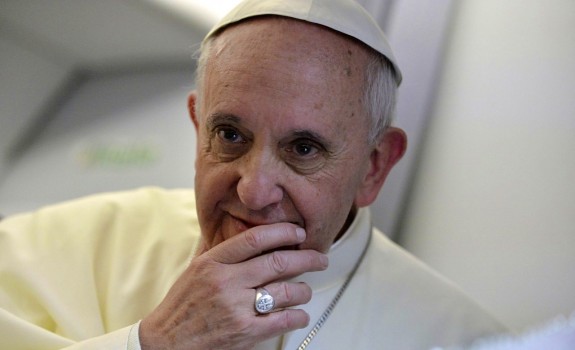 You may want to sit down for this:

I’ve just watched the actual video of Pope Francis’ airplane press conference, and it’s even more remarkable than the quotes we gleaned earlier from reporters like John Allen. What’s so striking to me is not what he said, but how he said it: the gentleness, the humor, the transparency. I find myself with tears in my eyes as I watch him. I’ve lived a long time to hear a Pope speak like that – with gentleness and openness, reasserting established dogma with sudden, sweeping exceptions that aren’t quite exceptions – except they sure sound like them…

…I heard in the voice of Francis today the voice of Jesus confronted with the woman about to be stoned for adultery. No, he does not condone adultery. But the entire dynamic of the story is about something else: it’s about how Jesus defused an impending, brutal execution by bobbing and weaving and drawing in the sand and then speaking intimately with the woman herself with what can only be called revolutionary empathy.

“They are our brothers.” That’s the tone of Jesus. That is, for the Papacy, revolutionary empathy.

Perhaps this is a better way of seeing the difference between Francis and what came before him.

It is impossible to think of Jesus seeing the marginalized of his time, like lepers or Samaritans, and teaching them that they are “somehow distorted, off center, and … not within the direction of creation” because of something they simply are and cannot change. Jesus – as represented by the Gospels – clearly sees that kind of rigid, callous thinking as the mark of Pharisees, the sign of a religion that has forgotten love in its obsession with law, and therefore cannot be connected with the Father of all Creation which is Love. Francis, mind you, does not rebuke Benedict XVI; he pours out affection for him. But everything he is saying and doing is an obvious, implicit rejection of what came before. What Francis is doing is not suddenly changing orthodoxy; he is instead pointing us in another direction entirely. He is following Saint Francis’ injunction: “Preach the Gospel everywhere; if necessary with words.” He is a walking instantiation of the way Jesus asked us to live: with affection and openness, charity and forgiveness; and a reluctance to seize on issues of theology instead of simply living a life of faith, which is above all a life of action in the service of others:

We all have a duty to do good. And this commandment for everyone to do good, I think, is a beautiful path towards peace. If we, each doing our own part, if we do good to others, if we meet there, doing good, and we go slowly, gently, little by little, we will make that culture of encounter: we need that so much.

Yes, we do, Holy Father. We so sorely do.

July 30, 2013 Sanity and Clarity
Browse Our Archives
get the latest from
Catholic
Sign up for our newsletter
POPULAR AT PATHEOS Catholic
1