Pope Francis to Muslims: “We are called to respect the religion of the other…”

Pope Francis to Muslims: “We are called to respect the religion of the other…” August 2, 2013 Deacon Greg Kandra 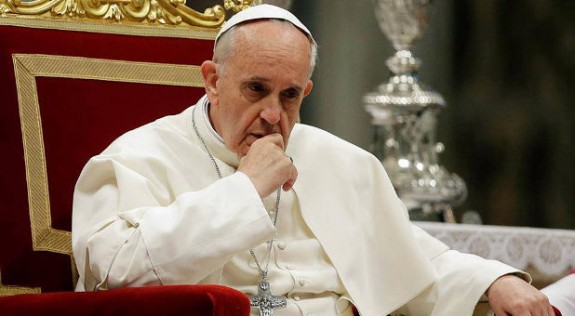 The Vatican has just published Pope Francis’s message to Muslims for the close of Ramadan:

To Muslims throughout the World

It gives me great pleasure to greet you as you celebrate ‘Id al-Fitr, so concluding the month of Ramadan, dedicated mainly to fasting, prayer and almsgiving.

It is a tradition by now that, on this occasion, the Pontifical Council for Interreligious Dialogue sends you a message of good wishes, together with a proposed theme for common reflection. This year, the first of my Pontificate, I have decided to sign this traditional message myself and to send it to you, dear friends, as an expression of esteem and friendship for all Muslims, especially those who are religious leaders.

As you all know, when the Cardinals elected me as Bishop of Rome and Universal Pastor of the Catholic Church, I chose the name of “Francis”, a very famous saint who loved God and every human being deeply, to the point of being called “universal brother”. He loved, helped and served the needy, the sick and the poor; he also cared greatly for creation.

I am aware that family and social dimensions enjoy a particular prominence for Muslims during this period, and it is worth noting that there are certain parallels in each of these areas with Christian faith and practice.

This year, the theme on which I would like to reflect with you and with all who will read this message is one that concerns both Muslims and Christians: Promoting Mutual Respect through Education.

This year’s theme is intended to underline the importance of education in the way we understand each other, built upon the foundation of mutual respect. “Respect” means an attitude of kindness towards people for whom we have consideration and esteem. “Mutual” means that this is not a one-way process, but something shared by both sides.

What we are called to respect in each person is first of all his life, his physical integrity, his dignity and the rights deriving from that dignity, his reputation, his property, his ethnic and cultural identity, his ideas and his political choices. We are therefore called to think, speak and write respectfully of the other, not only in his presence, but always and everywhere, avoiding unfair criticism or defamation. Families, schools, religious teaching and all forms of media have a role to play in achieving this goal.

Turning to mutual respect in interreligious relations, especially between Christians and Muslims, we are called to respect the religion of the other, its teachings, its symbols, its values. Particular respect is due to religious leaders and to places of worship. How painful are attacks on one or other of these!

It is clear that, when we show respect for the religion of our neighbours or when we offer them our good wishes on the occasion of a religious celebration, we simply seek to share their joy, without making reference to the content of their religious convictions.

Regarding the education of Muslim and Christian youth, we have to bring up our young people to think and speak respectfully of other religions and their followers, and to avoid ridiculing or denigrating their convictions and practices.

We all know that mutual respect is fundamental in any human relationship, especially among people who profess religious belief. In this way, sincere and lasting friendship can grow.

When I received the Diplomatic Corps accredited to the Holy See on 22 March 2013, I said: “It is not possible to establish true links with God, while ignoring other people. Hence it is important to intensify dialogue among the various religions, and I am thinking particularly of dialogue with Islam. At the Mass marking the beginning of my ministry, I greatly appreciated the presence of so many civil and religious leaders from the Islamic world.” With these words, I wished to emphasize once more the great importance of dialogue and cooperation among believers, in particular Christians and Muslims, and the need for it to be enhanced.

With these sentiments, I reiterate my hope that all Christians and Muslims may be true promoters of mutual respect and friendship, in particular through education.

Finally, I send you my prayerful good wishes, that your lives may glorify the Almighty and give joy to those around you.

Happy Feast to you all!

UPDATE: It’s interesting to compare this with remarks that Pope John Paul II made to young Muslims in 1985:

Christians and Muslims, we have many things in common, as believers and as human beings. We live in the same world, marked by many signs of hope, but also by multiple signs of anguish. For us, Abraham is a very model of faith in God, of submission to his will and of confidence in his goodness. We believe in the same God, the one God, the living God, the God who created the world and brings his creatures to their perfection.

It is therefore towards this God that my thought goes and that my heart rises: it is of God himself that, above all, I wish to speak with you; of him, because it is in him that we believe, you Muslims and we Catholics. I wish also to speak with you about human values, which have their basis in God, these values which concern the blossoming of our person, as also that of our families and our societies, as well as that of the international community. The mystery of God, is it not the highest reality from which depends the very meaning which man gives to his life? And is it not the first problem that presents itself to a young person, when he reflects upon the mystery of his own existence and on the values which he intends to choose in order to build his growing personality?

For my part, in the Catholic Church, I bear the responsibility of the successor of Peter, the Apostle chosen by Jesus to strengthen his brothers in the faith. Following the Popes who succeeded one another uninterruptedly in the passage of history, I am today the Bishop of Rome, called to be, among his brethren in the world, the witness of the Christian faith and the guarantee of the unity of all the members of the Church…

…We are convinced that “we cannot truly pray to God the Father of all mankind, if we treat any people in other than brotherly fashion, for all mankind is created in God’s image”. (Decl.Nostra Aetate, n. 5).

Therefore we must also respect, love and help every human being, because he is a creature of God and, in a certain sense, his image and his representative, because he is the road leading to God, and because he does not fully fulfil himself unless he knows God, unless he accepts him with all his heart, and unless he obeys him to the extent of the ways of perfection.

Furthermore, this obedience to God and this love for man should lead us to respect man’s rights, these rights which are the expression of God’s will and the demands of human nature such as it was created by God.

Therefore, respect and dialogue require reciprocity in all spheres, especially in that which concerns basic freedoms, more particularly religious freedom. They favour peace and agreement between the peoples. They help to resolve together the problems of today’s men and women, especially those of the young.

Interestingly, similar messages in years past have sometimes been issued by Vatican curial offices, not by the pope directly.

August 1, 2013
On Pope Francis: "The press decided early on that he is humble, spontaneous, liberal, broad, pro-poor..."
Next Post

August 2, 2013 The problem of instant canonizations at Catholic funerals
Browse Our Archives
get the latest from
Catholic
Sign up for our newsletter
POPULAR AT PATHEOS Catholic
1