The last words the cardinals heard before electing the pope 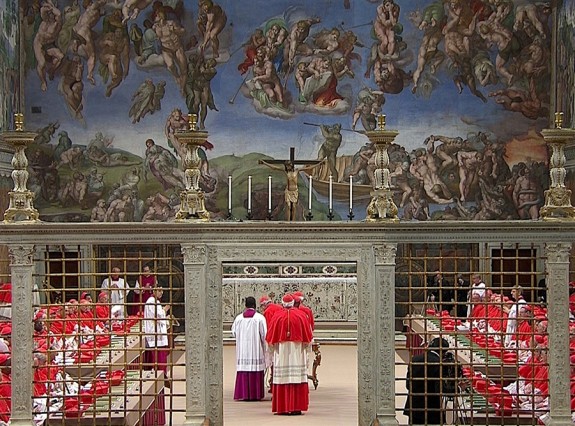 An interesting piece of papal history, via CNS:

The last formal exhortation to the 115 cardinals who elected Pope Francis in March included reminders of the importance of presenting the Catholic faith in its entirety, the need to recognize the errors of church members and the need for unity within the Catholic community.

Maltese Cardinal Prosper Grech, 87, was too old to vote in the conclave, but the 115 cardinals under age 80 asked him to enter the Sistine Chapel with them March 12 and offer a meditation before they began voting.

The text of the cardinal’s remarks was not released at the time. The Vatican newspaper, L’Osservatore Romano, published the meditation in its Aug. 8 edition.

Cardinal Grech, an Augustinian priest and expert on the fathers of the early church, had told the cardinal electors that he was not there to outline the characteristics needed in a new pope, but to use Scripture to reflect on “what Christ wants from his church.”

First, he said, the church is called to proclaim the kingdom of God and the good news of salvation through Christ.

“The church does this presenting the Gospel without shortcuts, without diluting the word,” he said.

The cardinal warned that too many Catholics erroneously think that baptism and participation in the sacraments are not necessary because the Second Vatican Council recognized the possibility of “salvation even for those outside the church.”

Too many Catholics, he said, do not know the teachings of the church; “not only does an ignorance and lack of care about Catholic doctrine reign,” but also an ignorance of the basics of Christianity itself.

One of the biggest threats Cardinal Grech saw was a threat to the unity of the Catholic community. “Between ultra-traditionalist extremists and ultra-progressive extremists, between priests rebelling against obedience and those who don’t recognize the signs of the times, there always will be the risk of small schisms that not only damage the church, but go against the will of God.”

Many Catholics, he said, seem to think that “progress in the church is based on the degree of freedom given in the area of sexuality.”

As for mandatory celibacy for priests in the Latin-rite church, he said it is true that some church disciplines can change, “but not every change means progress. One must discern if such changes work to increase the holiness of the church or obscure it.”

August 8, 2013
Fore! One man's journey from putting to the priesthood
Next Post

August 8, 2013 Everybody nedes an editor
Browse Our Archives
Related posts from The Deacon's Bench