“Car talk” about the pope’s Renault 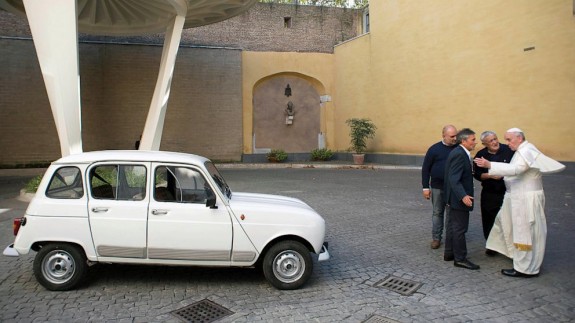 Earlier this week, the pope got a new set of wheels.    And now CNS has collected some priceless reaction:

Leave it to the slapstick brothers, Tom and Ray, at Car Talk to have a field day with the news of Pope Francis’ recent present: a lovingly used 30 hp 1984 Renault 4.

As soon as the now-retired radio hosts heard the news, they went on Facebook and Twitter and let the witticisms and quips rip.

The Pope buys a 1984 Renault… Now there’s a man who believes in the power of prayer. http://yhoo.it/1e49GlK

But the best part was they let their fans join the fun with #PopesRenault and #VaticanMechanic:

September 13, 2013 "If you speak ill of your brother, you kill your brother..."
Browse Our Archives
Related posts from The Deacon's Bench