The pope’s powerful outreach to a prodigal people 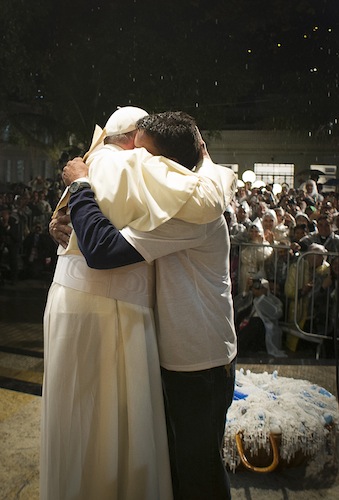 I’ve been reading some of the reaction to the ground-shaking interview with Pope Francis. Not all of it has been warm.

Traditionalists, in particular, find it worrisome, and some conservative commentators have been downright hostile.

It seems to me they are missing the point.  The Holy Father was speaking to the world, but he was also speaking to one particular part of the world—those who have felt, for far too long, like outcasts.  Again and again, the message coming through the pope’s interview is: you have not been cast out.  Come back.  There is a way.  Let us help you find it.

He’s speaking to the lapsed, the wandering, the angry, the searching.  He’s calling out to those who have stormed off.

His vision, it seems to me, is not of a smaller church. He sees something larger, grander, greater.

In his interview, he said “This church with which we should be thinking is the home of all, not a small chapel that can hold only a small group of selected people. We must not reduce the bosom of the universal church to a nest protecting our mediocrity.”

Francis envisions not a chapel, but a cathedral.

His remarks speak to those he wants to be a part of it.  Knock down the walls.  Raise the roof.  Make room for more.

The pope’s interview was targeting the indifferent Catholic who attends Mass sporadically and feels disenfranchised or shunned.

He was speaking to the couples who have been refused a wedding because they are living together.

He was speaking to the parents who were denied an infant’s baptism because they were unmarried.

He was speaking to gays whose behavior has been called “intrinsically disordered” and who feel, as a result, defective and unwelcome.

He was speaking to Catholics like one family member I know, who has stopped going to Mass because he and his wife conceived a child through IVF.

Pope Francis was speaking to those living with the heartbreak of abortion and the alienation of divorce.

He was speaking to those who have been away from the confessional, and the communion rail, and the grace of the sacramental life of the Church, because of a harsh word muttered through the grail.  He was addressing those who feel guilty or ashamed or afraid of what the priest might say.   “The confessional is not a torture chamber,” the pope explained.

He was also speaking to atheists and skeptics and non-believers who again and again in the last few weeks have launched a conversation in social media with the surprising words, “I really like this pope.”

He was engaging the disengaged, inviting those who feel disinvited—and, almost overnight, he has changed the public perception of the institutional Church.

In short, Pope Francis wasn’t preaching to the choir. He was preaching to those in the periphery—the ones lurking just outside the doors of the church, wondering whether it’s okay to come in from the cold.  Maybe they’re sitting in the parking lot, nursing a hurt; maybe they’re watching from across the street, harboring a grudge.  The pope was inviting them to come home, come back, step inside, lay down your burden.  The Church, he was saying, is more than what you may think.

She is the Body of Christ. And all of you, he was adding, are a part of it.

This pontificate is only six months old. There will be many more months, and God willing, many more years for Francis to extend his hand to those who are already close to the heart of the Church.  But I think this landmark interview was intended for those who are not there yet—but could be.  It’s a first step.

The gospel two Sundays ago of the prodigal son should give all of us a sense of what is unfolding right now, with its message of mercy.  Francis is embarking on a great outreach, the results of which are impossible to predict. But he is undertaking something extraordinary.  The father is seeking the lost.

Take heart.  And make room.  Once the door is open, and the call has been heard, who knows who may walk in?

“My son, you are here with me always;
everything I have is yours.
But now we must celebrate and rejoice,
because your brother was dead and has come to life again;
he was lost and has been found.’”

September 23, 2013
What's in a name? Some insight into Pope (George Mary) Francis
Next Post

September 23, 2013 NCR: Newark to get a coadjutor archbishop, Hebda from Gaylord
Browse Our Archives
Related posts from The Deacon's Bench