On Pope Francis: “The lapsed are listening” 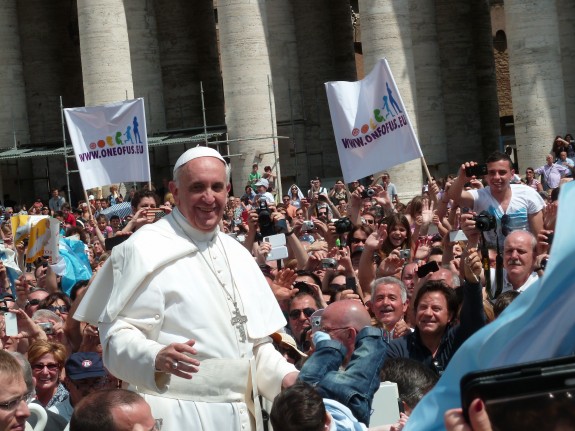 From Timothy Egan in the New York Times:

He is — gasp — a liberal. Or at the least, as he said, “I have never been a right winger.” But to put him in those restrictive political terms does a disservice to the quiet revolution of Pope Francis.

It’s long been known that most North American and European Catholics ignore church teachings on gays, contraception and abortion. These teachings range from absurd to unscientific to outright hateful. Without specifically changing the official line, Francis prompted millions of Catholics to give the church a second look when he criticized the hierarchy for being “obsessed” with those issues. Amen, said nearly 70 percent American Catholics who agreed with him in a Quinnipiac poll.

The anecdotal reaction is equally intriguing. “People come up to me all the time on the street or at a restaurant and say things like, ‘I just need to tell someone how much I like this pope of yours,’” said Father Stephen Sundborg, a Jesuit (like Francis) who is president of Seattle University, based in one of the most secular cities in the United States. “Suddenly, it seems O.K. to be a priest out there.”

All of this is by design. Francis is working two broad strategies. The first is aimed at lapsed Catholics, and those who are open to a spiritual life with an intellectual framework. Thus, he dismissed proselytizing as “solemn nonsense,” in a recent interview. “It makes no sense,” he said of the blunt harangues over whose God is better.

The Jesuits have always tried to get people to think for themselves, to arrive at belief through an arduous process. When bishops started telling parishioners that their gay and lesbian siblings were sinners, and that family planning was a grievous wrong, people stopped listening to them — for good reason.

“In terms of people in the pews, the Catholic Church lost roughly one-fourth of its strength over the last 35 years,” wrote the political scientists Robert Putnam and David Campbell in their book “American Grace.” They argue that when the religious right politicized faith, they put a “not welcome” sign on the door for millions of people of faith. This was compounded by the hypocrisy of these same moral authorities protecting pedophile priests while ignoring the lifelong anguish of the victims. For much of the 20th century, the Catholic Church in places was essentially organized crime in clerical garb…

…His second strategy is aimed at the hardened heart of the church inside Vatican Square — the curia. He has summoned the cardinals for discussions on how to reform the church, the role of women and posture toward divorced Catholics. One goal is to remove the adjective “scandal-plagued” from curia…

…The only problem with Francis is his age. If he were 50, he might have a quarter-century to move his church up several centuries in enlightened thinking. His time is short. But what a miraculous sprint, producing this minor miracle: the lapsed are listening.

October 12, 2013 "Staring into a mirror, not looking out a window..."
Browse Our Archives
Follow Us!