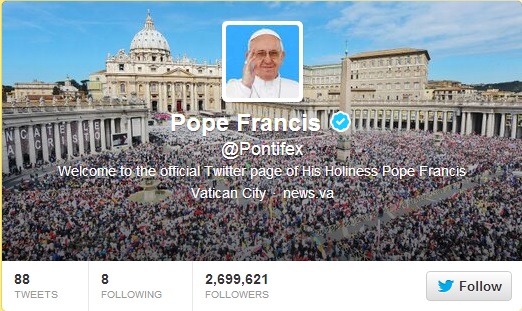 “When the Pope went on Twitter. We can see where in the world the Pope has followers,”  Msgr. Paul Tighe, among the Pope’s advisers managing his Twitter account @Pontifex, said in a Catholic Bishops Conference of the Philippines report.

“We were surprised to see that in the Middle Eastern countries and Gulf states, there were huge following. Then we realized that those were the Filipinos,” he added.

Tighe, the secretary of the Pontifical Council for Social Communications, said that social media have been helpful for Filipino-Catholics abroad to connect with and deepen their faith especially in places when they cannot openly practice it.

“These Filipinos are in a situation that are not easy for Catholics but Twitter is something that allowed them some connection to the Church,” he said.

He also urged Filipinos to continue using social media and the Internet to express their spiritual convictions and to boost their identification with the Church.

Tighe, who arrived in Manila to speak at a Catholic social media conference, said that the OFWs’ expressiveness of their catholicity is something he “loves about Filipinos.”

November 22, 2013
Baltimore welcomes a new priest—and his wife and seven children
Next Post

November 22, 2013 Love at first sight: grooms seeing their brides for the first time
Browse Our Archives
get the latest from
Catholic
Sign up for our newsletter
POPULAR AT PATHEOS Catholic
1