“It is important to understand the Second Vatican Council as the Catholic Church’s response to World War II…” December 7, 2013 Deacon Greg Kandra

Deacon Bill Ditewig, commemorating the attack on Pearl Harbor on December 7, 1941, has this take:

Pope John Paul II, in his 2004 Message for the World Day of Peace, referred to the Second World War as “an abyss of violence, destruction and death unlike anything previously known.”  How does a world recover from such madness?  For those of us who were born following the War, we have lived with its effects our whole lives, even though specific memories of the War continue to fade with the passing of the World War II generation. 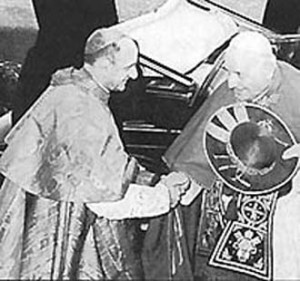 For Catholics, I believe it is important to understand the Second Vatican Council as the Catholic Church’s response to World War II: the conditions that led to the War and the world that emerged after it.  Pope John XXIII announced his plans for the Council only fourteen years following the end of War.  Opening the Council, he observed:

We feel we must disagree with those prophets of gloom, who are always forecasting disaster, as though the end of the world were at hand.  In the present order of things, Divine Providence is leading us to a new order of human relations which, by men’s own efforts and even beyond their very expectations, are directed toward the fulfillment of God’s superior and inscrutable designs. And everything, even human differences, leads to the greater good of the Church.

How do we cooperate with Divine Providence in attaining this “new order of human relations”?  The bishops of the Council were not seeking simple superficial updating of the Church; they were setting out to create a new understanding of the Church in a world already gone mad and in need of the “soul and leaven” a renewed Church might provide…

…As we remember the personal, national and global tragedies of the Second World War, may we this Advent renew our commitment and preparation for the new order of human relations foreseen by Pope John.  May we, like Mary pregnant with the Christ, work to bring Christ and his Gospel to the world in the real, concrete terms envisioned by the Council and now renewed for us again by the words and deeds of Pope Francis.

December 7, 2013 Ordination update: 6 new deacons for Tyler
Browse Our Archives
get the latest from
Catholic
Sign up for our newsletter
POPULAR AT PATHEOS Catholic
1

Dark Devotional: Playing Craps with Jesus
“If anyone wishes to be first, he shall be the last...
view all Catholic blogs
Copyright 2008-2021, Patheos. All rights reserved.