Details from The National Catholic Register:

Vatican spokesman Father Federico Lombardi has strongly criticised an article on Pope Francis that appears in the latest edition of Rolling Stone magazine. 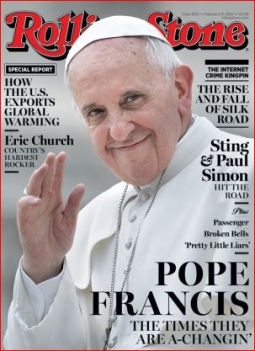 Although he acknowledged that the Holy Father’s appearance on the publication’s front cover shows a diverse interest in the Pope, the Jesuit spokesman denounced the article’s negative portrayal of Pope Emeritus Benedict XVI’s pontificate, saying the piece disqualifies itself as serious journalism.

“Unfortunately, the article disqualifies itself, falling into the usual mistake of a superficial journalism, which in order to highlight the positive aspects of Pope Francis, thinks it should describe in a negative way the pontificate of Pope Benedict, and does so with a surprising crudeness,” Fr. Lombardi said in a statement.

In the piece titled “Pope Francis: The Times They Are A-Changin'”, author Mark Binelli calls Benedict’s papacy “disastrous” and goes so far as to attack the former pontiff’s appearance and character. He also describes Benedict’s acclaimed apostolic exhortation Sacramentum Caritatis as “wonky” but without explaining further.

“What a pity,” Fr. Lombardi said. “This is not the way to do a good service even to Pope Francis, who knows very well what the Church owes to his predecessor.”

Meantime, my blog neighbor Elizabeth Duffy has her own thoughts on the Rolling Stone cover:

Catholics are so used to pope bashing that we become skeptical when the media loves him or any part of our faith. It’s tempting to think these are apocalyptic times. The seed must be falling on rocky ground, and eventually the media is going to wake up and realize that the Pope is still Catholic (or as some conspiracy theorists fear, maybe the Church will wake up and discover that the Pope no longer is).

Personally, I’m questioning my hesitation to scatter the word of God broadly and gratuitously. “Whoever has ears to hear ought to hear,” and the Holy Father has opened up deaf ears. It is ok to relax for a moment and see if it will take root.

..Maintaining rich ground for the growth of the word is a life long process that takes practice, cultivation, and a commitment to cast seed broadly in every single season. Keep going back to the word, and sometimes it will take root, other times it won’t. But we can’t withhold the effort or the good food out of fear it will not be appreciated. The worst possible outcome is not that the word will fail to root, but that no one will ever plant.

Well said! Read it all.

January 29, 2014
When did presidents start saying "God bless America" at the end of speeches? You might be surprised.
Next Post