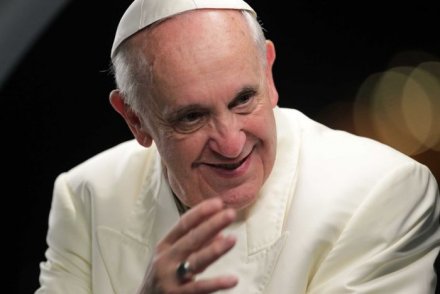 Some inspiration to kick off 2014, from a Filipino writer who distills key teachings of the pope down to 10 resolutions that all of us should try to keep:

He preaches against gossip, reminds us to finish our meals, and even tells us not to fear marriage.

Described as the “world’s parish priest,” Pope Francis goes beyond abstract theology, and gives us advice we can use daily.

What lessons from him can we bring into 2014?

Rappler compiles 10 of the Pope’s most memorable quotes in the form of New Year’s resolutions. This is the Pope Francis list.

It’s one of our hobbies. For Francis, it’s also one of the most evil activities.

He feels so strongly about it that in less than a year as pontiff, Francis has preached against gossip in at least 6 different instances. Read the following homilies by Francis as well as a recent speech:

He says when we gossip, we “are doing what Judas did,” and “begin to tear the other person to pieces.”

“Every time we judge our brother in our hearts or worse when we speak badly of them with others, we are murdering Christians,” Francis says. “There is no such thing as innocent slander.”

Named after a 12th-century saint who lived in poverty, Francis slams a “culture of waste” that neglects the plight of the hungry. (READ: Pope: Wasting food is stealing from the poor)

The Pope says: “We should all remember… that throwing food away is like stealing from the tables of the poor, the hungry! I encourage everyone to reflect on the problem of thrown away and wasted food to identify ways and means that, by seriously addressing this issue, are a vehicle of solidarity and sharing with the needy.”

3. Make time for others.

Tending to 1.2 billion members, Francis seems too busy for anything else.

That is, until he calls up strangers. Or entertains a random biker. Or sends a handwritten letter to a Jesuit he has never met.

The Jesuit who got the letter, Fr James Martin, says Francis inspires him “to be more generous in my own life with my time.”

Martin says: “If the Pope can find time to be kind to others, if he can pause to say thank you, if he can take a moment make someone feel appreciated, then so can I. So can we.” (READ: Making time for others: the Pope’s way)

Those are just for starters.  Read them all.  Good stuff.

January 1, 2014 Turn the other tweet: social media resolutions from Fr. James Martin
Browse Our Archives
get the latest from
Catholic
Sign up for our newsletter
POPULAR AT PATHEOS Catholic
1