Cardinal Burke: Pope Francis seeks to “pare back every conceivable obstacle” to Christ

Cardinal Raymond Burke has just published an essay that David Gibson says seeks to reassure conservatives about the pope:

As Pope Francis led the world’s cardinals in talks aimed at shifting the church’s emphasis from following rules to preaching mercy, a senior American cardinal took to the pages of the Vatican newspaper on Friday (Feb. 21) to reassure conservatives that Francis remains opposed to abortion and gay marriage. 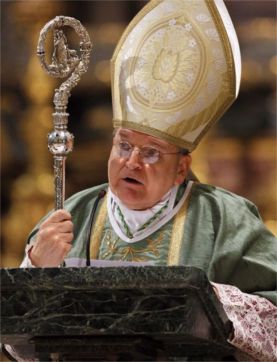 Cardinal Raymond Burke acknowledged that the pope has said the church “cannot insist only on issues related to abortion, gay marriage and the use of contraceptive methods.” But in his toughly worded column in L’Osservatore Romano, the former archbishop of St. Louis blasted those “whose hearts are hardened against the truth” for trying to twist Francis’ words to their own ends.

Burke, an outspoken conservative who has headed the Vatican’s highest court since 2008, said Francis in fact strongly backs the church’s teaching on those topics. He said the pope is simply trying to find ways to convince people to hear the church’s message despite the “galloping de-Christianization in the West.”

Burke added that the “false praise” from those who highlight Francis’ shift in tone and practice actually “mocks” his role as pope. Francis, the cardinal said, trusts God alone and “rejects the acceptance and praise of the world.”

From the cardinal’s column:

The Holy Father, it seems to me, wishes to pare back every conceivable obstacle people may have invented to prevent themselves from responding to Jesus Christ’s universal call to holiness. We all know individuals who say things like: “Oh, I stopped going to Church because of the Church’s teaching on divorce”, or “I could never be Catholic because of the Church’s teaching on abortion or on homosexuality”. The Holy Father is asking them to put aside these obstacles and to welcome Christ, without any excuse, into their lives. Once they come to understand the immeasurable love of Christ, alive for us in the Church, they will be able to resolve whatever has been troubling them about the Church, His Mystical Body, and her teaching.

Surely, persons whose hearts are hardened against the truth will read something very different into the approach of Pope Francis, claiming that, in fact, he intends to abandon certain teachings of the Church which our totally secularized culture rejects. Their false praise of the Holy Father’s approach mocks the fact that he is the Successor of Saint Peter, totally grounded in the Beatitudes, and that, therefore, with humble trust in God alone, he rejects the acceptance and praise of the world.

It is not that the Holy Father is not clear in his opposition to abortion and euthanasia, or in his support of marriage as the indissoluble, faithful and procreative union of one man and one woman. Rather he concentrates his attention on inviting all to nurture an intimate relationship, indeed communion, with Christ, within which the non-negotiable truths, inscribed by God upon every human heart, become ever more evident and are generously embraced. The understanding and living of these truths are, so to speak, the outer manifestation of the inner communion with God the Father in Christ, His only-begotten Son, through the outpouring of the Holy Spirit.

February 21, 2014
"I’ve concluded that the criticisms reflect the reporters’ serious misunderstanding regarding how an archbishop’s residence is used"
Next Post

February 23, 2014 Worth a thousand words: a little pope
Browse Our Archives
Related posts from The Deacon's Bench