Decision time at the Vatican?

Though there are several important meetings unfolding this week, Vatican watchers may have to keep watch a while longer, says John Thavis:

Pope Francis has named several advisory bodies, in addition to existing ones, to help him in the reform process. Their tasks sometimes overlap, and that complicates things. 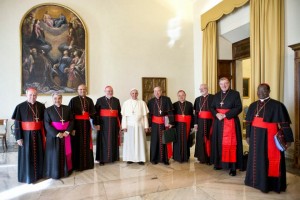 This week and next week, for example, the Vatican is experiencing a virtual gridlock of commissions, councils and consistories. There’s the commission on administrative and economic reforms and a separate commission on the future of the Vatican bank, both of which have reported to the Council of 8. Tomorrow, the “Council of 15,” an advisory body of cardinals established by Pope John Paul II to monitor financial affairs, will meet with the Council of 8. Thursday and Friday, a special consistory of cardinals will discuss themes of the upcoming Synod of Bishops on the Family, and next week the synod’s secretariat will hold a two-day meeting. The Council of 15 will hold its own session next week, too.

For reporters asking when decision-time might arrive, Father Lombardi was very cautious, noting that all these entities are advisory. Essentially, Pope Francis will decide when to decide.

Meanwhile, Archbishop Pietro Parolin, the Vatican secretary of state, who with 18 others will become a cardinal at a special liturgy Saturday, has been actively taking part in the meetings of the Group of 8. No one would be surprised if the pope makes Parolin a permanent member of the group, which would mean that the Secretariat of State would be weighing in on every proposed reform.

Let’s not forget that the Vatican has also hired outside consulting agencies to help simplify and coordinate its bureaucratic structures, especially in communication, and has turned to other financial management consultants to review Vatican financial practices. Their input also must be evaluated.

February 18, 2014
Worth a thousand words: the pope visits a parish
Next Post

February 18, 2014 Jimmy Fallon: "I wanted to be a priest"
Browse Our Archives
get the latest from
Catholic
Sign up for our newsletter
POPULAR AT PATHEOS Catholic
1