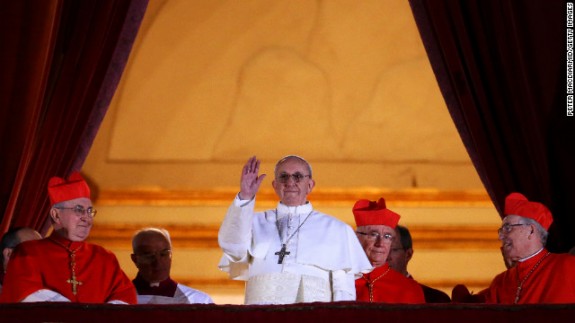 Several people alerted me to this over the weekend. It’s a compelling, balanced look at how the Franciscan pontificate is playing in Boston after one year,  from CNN’s Daniel Burke:

In some ways, the “Pope Francis effect” doesn’t seem very effective at all.

Despite the immense popularity the aged Argentine has won since his election last year, not a jot of doctrine has changed, nor has the Catholic Church swelled with American converts.

But there’s more than one way to measure a pontiff’s influence on his far-flung flock.

Start asking around — here in Boston and beyond, Catholics and atheists alike — and it’s easy to find people eager to share how one man, in just one year, has changed their lives.

There’s the gay man who finally feels welcome in his church.

The woman who weeps when headlines deliver good news at last.

The former priest who no longer clenches his fist during Mass.

The Latinos who waited forever for a Pope who speaks their language.

“I’m telling you, brother, if you focus on the numbers, you’re missing the story,” says the Rev. John Unni, a Boston pastor with an accent as thick as clam chowda.

“There’s an energy, a feeling, a spirit here. It’s like a healing balm.”

Nearly half the residents here have roots in the church. It’s home to a top Catholic college, one of just two Jesuit seminaries in the United States and a cardinal who has the ear of the Pope himself.

But Boston is also a city scarred by a church sex abuse scandal that harmed hundreds of children, demoralized dozens of innocent priests and broke the bonds of trust between clergy and congregants.

To say that Pope Francis has smiled and salved all those wounds is a stretch longer than the Boston Marathon, people here say. There are plenty of ex-Catholics who’ll never give the church a second look. But there are many others who say they just might.

March 10, 2014 What does it mean to be "Catholic"?
Browse Our Archives
get the latest from
Catholic
Sign up for our newsletter
POPULAR AT PATHEOS Catholic
1