Worth a thousand words: “Peter and Andrew”—UPDATED

A beautiful and poignant image from yesterday: 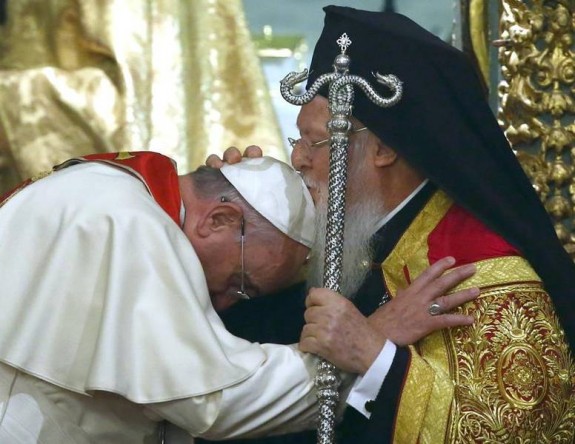 At the end of his speech, Pope Francis asked for Patriarch Bartholomew’s blessing and bowed down before him to receive it. Bartholomew then kissed Francis on the head. And so, the second day of the papal visit concluded with a highly symbolic gesture. Night had already fallen in Istanbul on the eve of the Feast of St. Andrew, Patron Saint of the Orthodox Patriarchate, as Francis entered the Church of St. George with his brother Bartholomew. Their moment of prayer was brief and gave the world a taste of what is to happen tomorrow when the Pope attends the Divine Orthodox Liturgy celebrated by the Ecumenical Patriarch. At the entrance to the church, the Pope venerated a large silver-plated icon.

In his welcoming speech, Bartholomew said Francis “translat[ed] the love of the Chief Apostle (the Apostle Peter, Ed.) to his brother, the First Called Apostle (Andrew).” The Patriarch recalled “similar visits by [His] Eminent predecessors”, quoting Paul VI, John Paul II and Benedict XVI. He spoke about Francis’ “will” and that of the “most Holy Church of Rome” to continue the fraternal and stable advance with the Orthodox Church for the restoration of full communion between Our Churches”. Bartholomew said he sees Francis’ visit as “an historical event filled with favourable signs for the future”.

The Patriarch thanked Catholics for returning the relics of St. Euphemia and also mentioned St. Basil and St. John Chrysostom. “May these holy Fathers, on whose teaching our common faith of the first millennium was founded, intercede for us to the Lord so that we may rediscover the full union of our Churches, thereby fulfilling His divine will.”

“As I express my heartfelt “thank you” for your fraternal welcome, I sense that our joy is greater because its source is from beyond; it is not in us, not in our commitment, not in our efforts – that are certainly necessary – but in our shared trust in God’s Faithfulness,” Francis responded in his own greeting.

UPDATE: At The Jesuit Post, Sam Sawyer saw that picture and immediately thought of Francis on the balcony the night he became pope.

This is how Francis exercises his authority — by helping us see who we are as Christians, as sinners redeemed by the merciful love of God, and as disciples called to the work of the kingdom. When he bowed on the balcony the day we met him, he told us that he needed our prayer, and therefore also that we were the ones whose prayer would be heard on high. His request for prayer allowed us to see and feel ourselves as the Body of Christ, to whose needs and service all the authority of the Bishop of Rome is oriented.

This is, perhaps, one of the most radical ideas that Christianity offers, and one that continues to come as a surprise to us, even long after we’ve first accepted the faith as true. Authority bows; power puts itself at the service of — is defined by being at the service of — the least of these.

November 30, 2014 Homeless and the wealthy break bread together
Browse Our Archives
Related posts from The Deacon's Bench