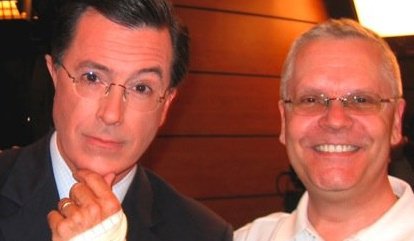 This one below, however, remains, my all time favorite.


UPDATE: James Martin, S.J., the chaplain of The Colbert Report, has some insight into Colbert The Catholic over at America:

He describes himself as the “Most Famous Catholic in America,” and demonstrates a vast knowledge of the Catholic faith. In fact, I always smile when I see guests who think that he doesn’t know what he’s talking about, only to be brought up short by his knowledge. And yes, I do see him very much as a catechist. In fact, he’s probably one of the most effective catechists in the American church. As I see it, he evangelizes with humor, and reaches a population–of mainly young, well educated, and sometimes skeptical men and women–who enjoy the way he combines some lighthearted satire of the church with a clear love for his faith. Stephen is, in my mind, an especially good evangelist of the Gospels’ emphasis on care for the poor. And he catechizes more people in a few minutes than I could do in a month of homilies.

December 19, 2014 NY Times: "Bolder vision" of Vatican diplomacy under Francis
Browse Our Archives
get the latest from
Catholic
Sign up for our newsletter
POPULAR AT PATHEOS Catholic
1