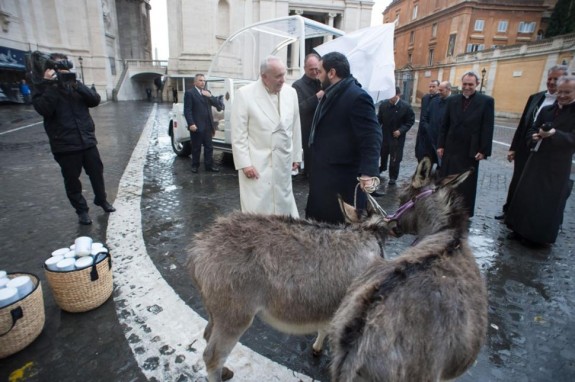 The head of the Roman Catholic Church has a fondness for donkey milk.

Pope Francis was given two of the animals this week by the Swiss firm Eurolactis, and the Pope waxed a little nostalgic about drinking donkey milk as a baby in his native Argentina.

The company’s founder, Pierluigi Orunesu, had a private meeting with Pope Francis on Thursday at the Vatican. He presented the pontiff with Thea and Noah, two donkeys that will ultimately live at the Pope’s summer home outside Rome.

“He was very happy,” Orunesu told the Dairy Reporter. “Pope Francis told me today, in front of media, that his mother regularly gave him donkey’s milk when she could not provide enough breast milk or later on, when he was a child.”

The visit occurred just a few weeks before Eurolactis begins selling cartons of donkey milk in Italy. The liquid contains less fat than cow’s milk and is considered close in structure to human breast milk.

December 8, 2014
"Text Me Merry Christmas": a carol for our times
Next Post

December 8, 2014 World Meeting of Families debuts official hymn: "Sound the Bell of Holy Freedom"
Browse Our Archives
get the latest from
Catholic
Sign up for our newsletter
POPULAR AT PATHEOS Catholic
1