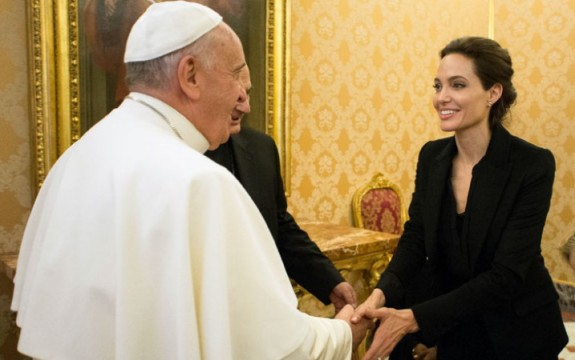 From John Allen in Crux:

Pope Francis met two American media stars on Thursday, though of vastly different types and levels of celebrity: Actress Angelina Jolie, whose fame speaks for itself, and Cardinal Raymond Burke, a hero to conservative Catholic critics of the maverick pontiff.

Jolie was in town to promote a new film she directed, “Unbroken,” about an American Olympic athlete and prisoner of war during World War II, which she has described as a story of “strength and forgiveness.”

Jolie has also said the experience of making the film has reopened her to the idea of the divine, if not any specific religious faith.

A screening of the movie was staged Thursday morning at the Vatican’s Pontifical Academy for Sciences, an office led by Bishop Marcelo Sánchez Sorondo, an Argentine and a confidante of Francis.

In a statement, Jolie called the chance to present the film at the Vatican “an honor.”

The pontiff did not attend the screening, which occurred at the same time he was holding meetings with Burke and other senior prelates. Afterward, however, Jolie had the chance to greet the pope briefly.

Burke’s encounter lasted 45 minutes and came as part of a series of morning sessions for the pontiff with several other prelates, including Polish Cardinal Zenon Grocholewski, who heads the Vatican’s Congregation for Catholic Education, and Cardinal André Vingt-Trois of Paris.

The session with Burke stands out, however, given his profile.

January 8, 2015
Recalling Oscar Romero, pope speaks of a "martyrdom of mothers"
Next Post