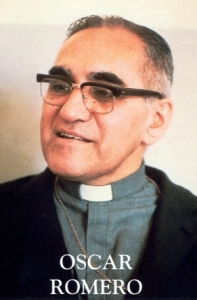 Image from The Archbishop Romero Trust

The Salvadoran Archbishop Oscar Arnulfo Romero was murdered “in hatred of the faith.” The news comes in the preview edition of “Avvenire” for Friday, January 9, 2015. The members of the commission of theologians at the Congregation for the Causes of Saints gave their unanimously positive vote about the martyrdom suffered by the Archbishop of San Salvador March 24 1980. It is a decisive step for the Latin American bishop, killed while celebrating the Eucharist and whom the people already acclaim as a saint. Now, according to the canonical practice for the beatification, next is the judgment of the commission of bishops and cardinals, and finally the approval of the Pope. The case, which began in March 1994 and concluded the diocesan phase the following year, landed in Rome in 1997, promoted by the postulator Monsignor Vincenzo Paglia.

First of all, the import of the theologians’ vote is that it enables the Church to designate Archbishop Romero as a “Blessed.”  This is the first step in the two step canonization process—in the second step, Romero can be called a “Saint.”  The first step is called beatification; the second step is canonization. Because Romero was proposed for the sainthood as a martyr, the decree certifying the validity of martyrdom is all that it takes for him to be beatified.  Someone who is not a martyr (like Mother Teresa or St. John Paul II) require the certification of a miracle in order to be beatified; Romero will not.  All sainthood candidates require a miracle, however, for the second step (canonization), unless the requirement is waived by the Pope.

The finding removes a major hurdle to declaring Romero a saint, something Pope Francis has signaled he wants to do. Among other things, being declared a martyr means that no miracle is required for beatification, the final step before sainthood.

For decades, some conservative critics of the liberation theology movement, both in Latin American and Rome, have argued that Romero was killed more over politics than religion, and thus he doesn’t qualify as a martyr in the technical sense of someone who died for the faith.

During a flight to Brazil in 2007, Pope Benedict XVI said that Romero was a “great witness of the faith,” but that his cause was a complicated one because “a political party wrongly wished to use him as their badge.”

(Benedict added that “[of the] merits for beatification, I do not doubt,” a comment not included in the Vatican’s official transcript.)

January 9, 2015
Pope Francis: Zen, yoga and catechism classes won't open your heart; turn instead to the Holy Spirit
Next Post

January 9, 2015 A priest forever
Browse Our Archives
get the latest from
Catholic
Sign up for our newsletter
POPULAR AT PATHEOS Catholic
1